Snooki: ‘I Was Bullied For Being Pretty’ 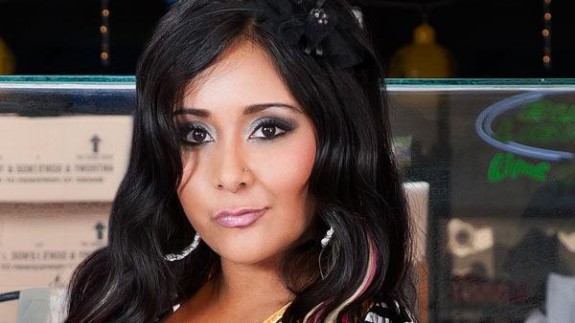 We’ve never heard of this kind of bullying before but… okay. Who knew that bullies now bully people because they are pretty. That’s what reality-TV star, Nicole ‘Snooki’ Polizzi said in the latest issue of V Magazine. The soon-to-be mother – who is also tying the knot after Jionni proposed to her back in March – said that she has been bullied all her life. In high school it was because she and all her friends were freshmen and really pretty which made the older girls jealous.

“I’ve been bullied my whole life. In high school, me and my girlfriends were freshmen and we were all pretty girls in cheerleading and stuff, so the older girls would bully us because all of their guys want to hang out with us.” The starlet who recently announced that her upcoming show with BFF, Jenni ‘JWoww’ Farley will air next month continued that she doesn’t feel she needs to change just because she’s a celebrity. She also recalls herself as being the “hottest thing ever,” yet people still called her fat.

“I don’t try to fit in like everyone else does in Hollywood. I just like to be different and I don’t care,” she said. “I think even haters love us. And I have a lot of haters. I mean, people used to say I was fat when I was the hottest thing ever. Imagine what they say now.”

She’s definitely a cheeky one, ain’t she? We admire her confidence, but saying that you were the “hottest thing ever” and that you were bullied for being pretty is just a little bit far-fetched, don’t you think? Please let us know below if you think we’re overreacting or if you agree with us! We love to hear from you.