Johnny Depp has a Double? (Photo) 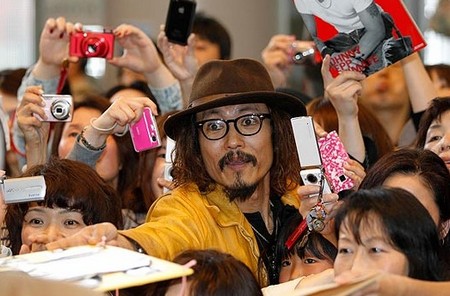 Johnny Depp went on a trip to Japan to promote is new film Dark Shadows and when he got to the airport he was instantly surrounded by a huge crowd of fans, but there was one fan in particular that caught my eye. There’s a man in the crowd who looks a lot like Johnny Depp!

In my entire life I’ve never thought that there would be a Japanese lookalike of Johnny Depp, the thing is though he’s got the hair, the facial hair and the clothes seem about right. From far away he actually does look very similar to Johnny Depp, though when you look at him from a closer distance you notice that he isn’t.

The man is named Ken Shizumu, he’s a big fan of Johnny Depp and even impersonates the talented actor. I’d like to see Johnny’s opinion on having a fan from Japan who impersonates him.

Meanwhile, Johnny is busy promoting his new film, Dark Shadows, directed by Tim Burton, where he plays Barnabas Collins, a 200 year-old vampire who is set free and returns to his home to help his dysfunctional family that really needs his help. The film was released last Friday in both conventional and IMAX theatres.

Johnny’s next project will be Lone Ranger where he plays Tonto in the western film set to be released in 2013.