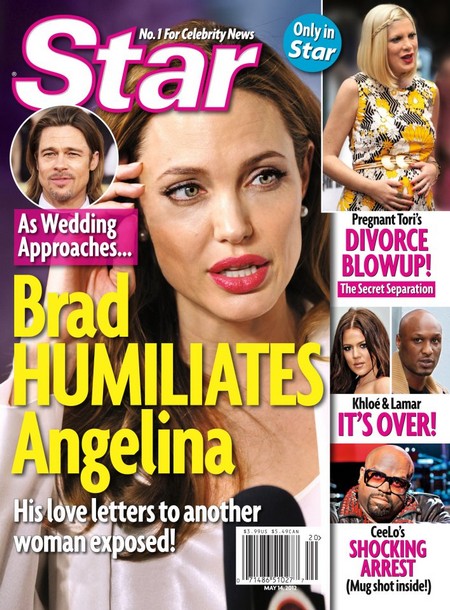 Brad Pitt‘s former fiancee, Jill Schoelen, is messing up Angelina Jolie‘s wedding plans by driving her crazy with envy and humiliation.  Angelina wanted to be Brad’s one and only true love – but that is no longer possible.  Angelina has learned that Brad Pitt was once more in love with another woman more than he is with her. When Brad was engaged to Jill Schoelen he was so completely in love that he composed countless love letters to her. Brad declared his undying love and passion for Jill in love poems and letters.

Angelina is freaking out as Jill has exposed Brad’s secret correspondence.

There sweet; their romantic; they’re the honest expression of a man to the woman he loves… But they’re not the words Brad Pitt used to propose Angelina Jolie. They are letters he wrote to his first fiancé, the one who got away.

Now that Angelina has finally gotten her ring, Brad’s ex, Jill Schoelen, 49, is speaking out about the deep love they shared in the racy letters Angelina didn’t even know existed.

“Brad wrote me one of the most beautiful poems the man can write a woman,” Jill, who dated Brad in the late” 80s tells star,” I thought he was so deep and soulful.”

Indeed, an insider confirms,” Brad was a hopeless romantic when he was younger. He was madly in love with Jill and opened himself up her completely.”  He was “consumed with her and poured his heart out to her in those letters,” the source continues.

“He wrote things that would make any woman’s legs go weak.”

“I adore you. I will love you forever,” one letter reads, according to the source. Adding yet another, written when the duo were spending some time apart, the source claims he confessed to his love, “I can’t stop thinking about you. I don’t feel complete without you next to me.”

Can Angelina get over this slap in the face?  Let us know what you think in the comments below.