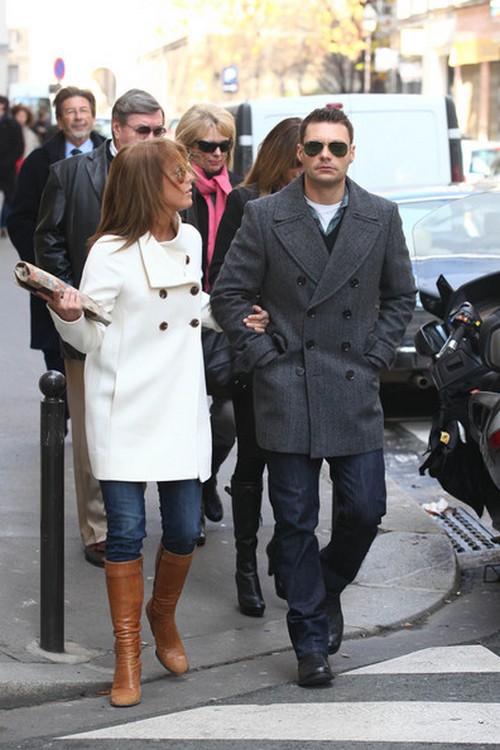 Ryan Seacrest wants to propose to Julianne Hough and part of his motivation was her flirtation with Phillip Phillips on American Idol.  Ryan got a wake-up call on this season’s show when Julianne overtly flirted with Phillip.  Perhaps Ryan now realizes that there are lots of fish in the sea for a beauty like Julianne and that he better put a ring on it before someone else does!

The American Idol host told Life & Style magazine that marriage is a topic that has come up between the couple.  “It’s something we talk about,” Seacrest confessed to Life & Style. But when we all ask… and Ryan says “We talk about that, too.”

Ryan played a trick on Julianne on Idol’s last episode – he tricked her into thinking he was proposing to her on live TV. During last Wednesday’s Idol show, Ryan interviewed Julianne after showing a clip of her new movie, Rock of Ages.

“There’s something that’s been on my mind,” Ryan coyly stated, standing next to Julianne. “It’s a question I’ve been meaning to ask you, and I don’t want you to feel uncomfortable.”

Ryan reached into his pocket and looked as if he were going for a ring while Julianne turned nervously and said, “Oh, God.”

But a proposal was not to be – Ryan pulled out a folded note instead. “Will you…give this note I wrote to Tom Cruise?” he said, referring to Julianne’s co-star in the film. “Because I’m such a big fan.”

Julianne played along with the joke but was she hurt?  Ryan must be leading up to a proposal or else he wouldn’t dare pull such a prank. When Life & Style asked if Seacrest was going the way of such silly televised love stories as Kim Kardashian and Kris Hrumphries or Jessica Simpson and Nick Lachey, he replied, “We wouldn’t televise our wedding.”

Let’s hope not!  We don’t want to be that close to our celebs.