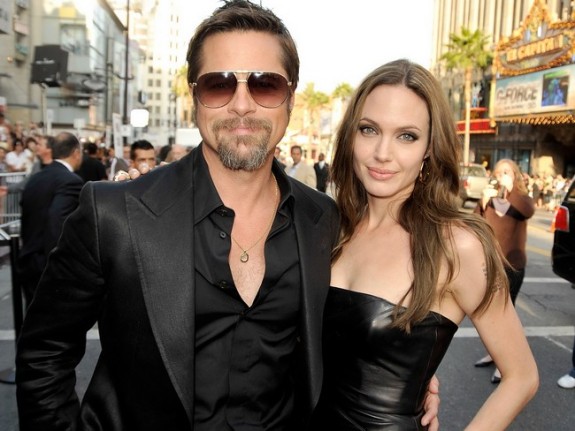 We know what Angelina Jolie is doing, she doesn’t mind spending a million bucks on a helicopter because she’ll get a hell of a lot of presents on her wedding day from A-list guests such as George Clooney and Johnny Depp. According to The Sun, Brad Pitt has been treated to a $1million helicopter by his fiancee after he installed a helicopter pad at their mansion in France where the couple spend most of their time.

Being the nice woman that she is, not only did she buy him the helicopter, she also paid for flying lessons . According to sources, Angie would love for Brad to fly her out to Cannes, which means that Pitt would have to start his flying lessons as soon as possible. Brad already has a pilot’s license but is still required to do them for helicopters too.

“They’ve had a helicopter pad installed in the grounds of their south of France home, Chateau Miraval. So Ange thought it would be nice to buy Brad a helicopter as a surprise present. In particular, they would like to be able to fly to and from Cannes. But even though Brad has his private pilot’s licence, he still needs to take a few flying lessons – which he’ll start straight away.”

The couple are hoping to get hitched in August, 11 – if everything goes to plan – which will also mark the wedding anniversary of Brad’s parents. The couple have told friends that this will be an extra special day because they’ll be celebrating two weddings rather than just one with all their close friends and family.