Kim Kardashian Takes A Pic Of Her New Tan And Says: ‘Tan Mom Has Some Serious Competition’ 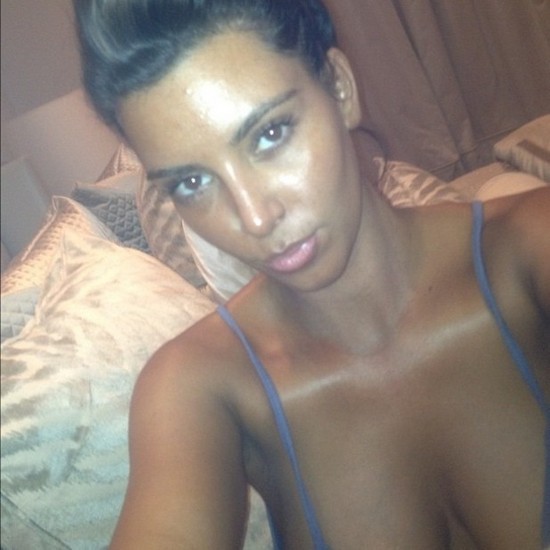 We can’t make out who is more annoying, Kim Kardashian or Tan Mom? Perhaps they are both just equally irritating. So, Kim was at another photoshoot where she got spray tanned from top to bottom. When she got home later that day, she immediately took to her Twitter to update us on her fabulous life; posting a pic of herself looking rather tanned with the caption: “The tannerexic mum has some serious competition!!! LOL”.

Fans were shocked at the picture when it was posted so Kim quickly tweeted out: “Relax that’s just a spray tan!!! It washed off & I’m back to my normal tan self! But how crazy does it look after being on for 8 hours. How do you spell tanorexic anyway? Tannerexic? Tannorexic? Is this even a real word?”

Kim, are you sure you want to pick fights with the Patricia Krentcil? She recently insulted Snooki – after the reality-TV star called her a bitch – and well, the Tan Mom definitely made us chuckle. She said: “She’s the biggest asshole in the world. She’s fake, she’s fat, her t*ts are fake, she’s disgusting.”

We can’t wait to hear what Patricia has to say about all of this. Who knows? Kim might go up to her house in New Jersey with the camera crew and confront her on what she had said. Haha! Wouldn’t that just be… awkward. And then, Scott Disick would walk in just before a fight starts and saves the day.