Want To Know How Much Demi Lovato Is Getting For X Factor? (Let’s Just Say It’s No Where Near Britney’s Salary) 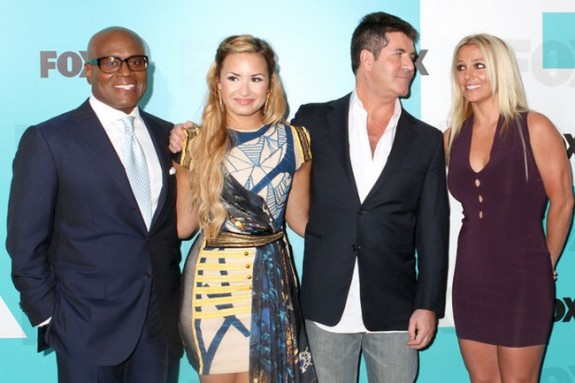 Poor Demi Lovato. Don’t get us wrong, we were so happy to find out a younger judge will be joining the show, knowing that the X Factor allows contestants from the age of 16 to audition – it made perfect sense. However, we were shocked to hear that the former Disney star only managed to scoop a little bit of money for her position on the show, while Britney Spears bagged the most out of all the judges.

Demi reportedly signed a $1million deal right before the Fox upfronts presentation while Spears took a whooping $15million home. According to TMZ, when Lovato got the news that producers wanted to sign her up for the show, she immediately took the offer – she didn’t hesitate whatsoever, no matter how much money she would have been offered. Here’s the thing, no matter if she gets $1million or $15million, appearing on the show every week is definitely going to boost her reputation now that Brit will get those ratings up.

While making his speech at the Fox event in NYC yesterday, Simon Cowell talked about Demi, saying: “Demi’s had an amazing career in music, TV and film for someone her age. She’s young, confident, and enthusiastic. I think it’s really important that she speaks to our younger audience.”

Meanwhile a confused, puzzled and nervous Britney said that she was excited to be joining the show and find the next X Factor star. Spears seemed totally out of it, she came across as someone who was attending an event but wasn’t actually suppose to be there – totally out of place. On the other hand, Lovato seemed full of joy as she said she felt honored working with the three judges in the upcoming season.

So… what do you think? Have producers made the right choice on picking these two new judges? To us – we don’t mind them. Demi is perfect, Brit is perfect but can they deliver? Will they get into arguments? We’ll just have to wait and see. Let us know what you think below!