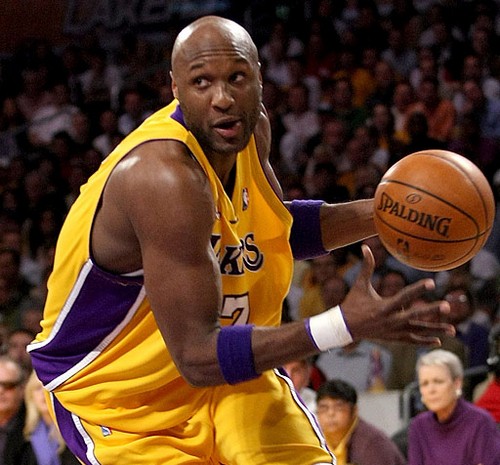 Does Lamar Odom really want to play Olympic Basketball?  It seems Lamar Odom, with his years of a great basketball career and his dump truck load of money, never can do enough for his wife, Khloe Kardashian, or his mother-in-law, Kris Jenner.  Apparently Kris has talked her daughter into putting pressure on Lamar to aim for a spot to play on the Olympic Basketball Team.  Of course this request has absolutely nothing to do with the sport that Lamar loves so much.

According to Hollywood Life Kris’s motives are showbiz related:

“The real reason she wants Lamar to be picked [for the U.S. Olympic basketball team] is so they can tape episodes for Khloe & Lamar or some reality show. Khloe wants a more diverse fan base and is hoping London will do the trick, considering that’s where the 2012 Olympics will be.”

The entire Kardashian clan intends to film inLondonthis summer which puts even more pressure on the already stressed out Lamar.  He hasn’t even made the Olympic team and spots are not a piece of cake to win!

“All the Kardashians are going to London this summer to tape Keeping up with the Kardashians. Khloe is putting tons of pressure on Lamar and he is completely stressed out. He feels like he has to be picked not only because of his own career, but because of Khloe and her mom, whom he considers his own mom. It’s too much pressure for Lamar,” a source says.

This family may be a money making machine but they truly have lost sight of what really matters.  Perhaps all the stress will lead to another divorced Kardashian daughter.  Recently Kris was pushing Khloe to divorce Lamar   just to improve ratings on the TV reality show Khloe & Lamar.

What are your thoughts?  Should they get off Lamar’s back?