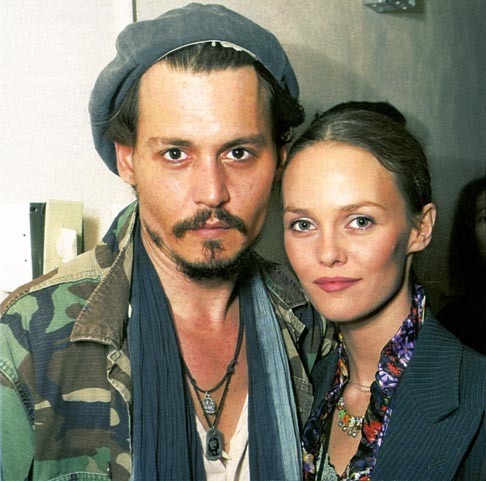 Johnny Depp’s red carpet statements to the contrary aside, his relationship with Vanessa Paradis is over, the couple have split up, and they have moved on with new lovers.

Wednesday Johnny denied that he and Vanessa had split. “The rumors are not true. They are absolutely not true,” Johnny, 48, said on the red carpet at the London premiere of Dark Shadows, according to U.K.’s Sun.

Johnny was seen boarding his private plane in Las Vegas last month with his new lover, Amber Heard, 26.  Amber and Johnny co-starred in The Rum Diary and allegedly began their romance while still filming the movie.

According to Life & Style Print Edition, May 21, Vanessa was not heartbroken by Johnny’s new relationship because she had already teamed up with her old pal, French singer Matthieu Chedid, 40.  Vanessa and Matt recorded a duet together last year and things went from music to much more.  “There are rumors in Paris that Vanessa’s dating Matthieu,” reveals a French fashion executive.  “They have worked on music together over the years. And now people here are saying they’re a couple.”

Vanessa and Johnny have not been seen together in months nor has she accompanied Johnny on a red carpet in over a year and a half.  Vanessa also failed to attend her own son’s recent birthday party that Johnny hosted.

Paradis was quoted as saying: “I believe in love, and I want to believe that it lasts forever. But I’m like everyone else, you have to take things a day at a time and you can never know what comes next. All you can do is hope and love and live.” Do these sound like the words of someone who is still in a relationship  with Johnny?

Even if grant that Johnny and Vanessa have an ‘open relationship’ – one in which they sleep with others, there remains no way to explain their failure to spend any time together, if they are in fact still a couple.  Vanessa skipping her own son’s 10th birthday party is the icing on the cake, so to speak. Despite Johnny’s denial, their relationship is over.

What do you think?   Let us know in the comments below.