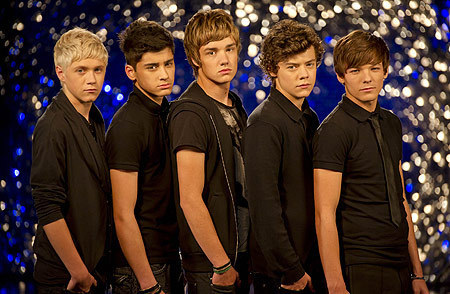 British-Irish boy band, One Direction who had their career launched after performing on Simon Cowell’s The X Factor, STINKS and this is all the fault of band mate, Louis Tomlinson.

At 20, Louis is the oldest in the group and now the smelliest. Fellow band mate, Niall Horan said that Louis has got some of the most horrid smelling feet in the world. To avoid any further embarrassment, Louis is heading to a much needed visit to see a chiropodist before One Direction starts their US tour this coming Tuesday.

Niall said “Louis has the smelliest feet ever. He wears plimsolls with no socks so his feet get very sweaty and the sweat is captured. If we are on a bus or something and he takes them off we all pretty much start gagging.” Wow, that’s disgusting!

First Louis almost kills himself and now this, I almost feel sorry for his fans.

I would really like to know what the 12-14 year old girls think of this… If you’re any older than that and like One Direction then I don’t know where you’re parents went wrong. I’ve got one thing to say, Niall can certainly relate to me, because now he knows how I feel whenever I hear one of his band’s songs on the radio or in my local clothing store, STINKS!