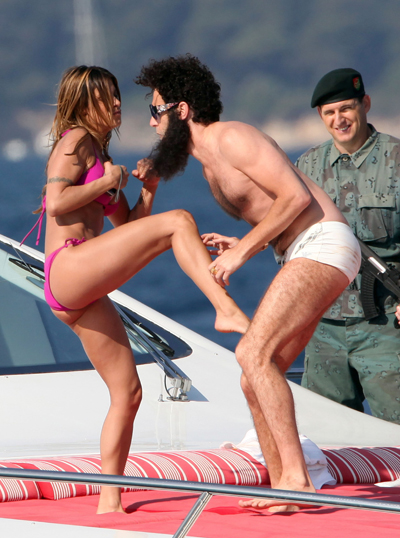 The Dictator was seen on a boat showing off his manhood to George Clooney‘s ex Elisabetta Canalis, but don’t worry, it was a scene out of Sacha Baron Cohen’s new film.

In one of the scenes in the ‘The Dictator’ Admiral General Aladeen, who Cohen plays as in the film, is on a boat with Elisabetta Canalis. All is going well between the two until Canalis makes fun of the size of Aladeens’ manhood, which leads to her being taken away and then thrown overboard in a bodybag.

Many men may feel that Admiral General Aladeen is a “man amongst men”, admit it. You’ve had times where a female was in fact annoying you fellow men and maybe made fun of your manhood as well, don’t you just wish you had the amazing manliness of Aladeen and could throw that annoying bitch off a boat? I know I would if it happened to me, but sadly life isn’t a movie.

All jokes aside, I think this movie looks incredibly promising. I’ve loved all of Cohen’s characters up till now and I can expect more greatness from this one. I love how he just uses these characters to exploit a certain group of people with his comedy. All people are of course afraid of a Dictator because they’ve all been senseless killers, so it’s nice to just move on with the world with a comedic film.