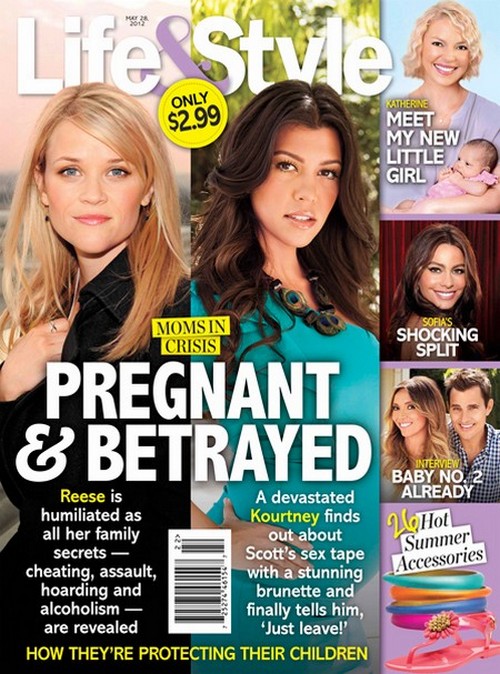 Kourtney Kardashian is horrified and wants Scott Disick to ‘just leave’ after discovering that he has ten sex tapes with mutliple women. The current issue of Life & Style features the cover story ‘Mom’s In Crisis – Pregnant & Betrayed.’ The magazine claims in a bombshell report that pregnant Kourtney Kardashian has been betrayed by her boyfriend and father of her children, Scott Disick again!

Apparently Scott has not one but ten sex tapes with multiple women.   Kourtney found out about them and went insane telling Scott to get our of her house. Life & Style has all the details on how Kourtney intends to protect her children.

“Scott was obsessed with sex,” Donald, who shot some of the racy encounters and has seen the lewd videos in full, tells Life & Style. “He loved it.   We tried to make it a daily routine, and some nights would be taped. There’s probably a good eight or nine tapes.  We thought, If we start videotaping ourselves, maybe one day we can make a TV show out of it,” he tells Life & Style. “Now Scott’s on a reality show. He was always trying to make it to the top.”

Kourtney recently had a classy baby shower on the west coast and Scott Disick missed it – he went and got frunk instead.  Scott was seen downing shots poolside from noon until 5pm while Kourtney was opening gifts from 90 friends and family at a specially catered affair.  Scott was caught vomiting in a garbage can.

What do you think, should Kourtney finally grow a brain and realize that Scott is never going to be a family man? I mean ten sex tapes – really!!