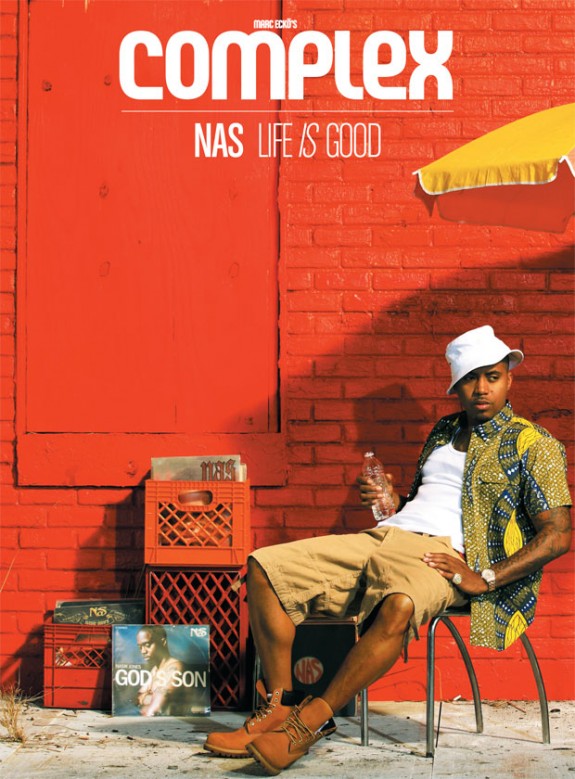 It’s been tough couple of years for rapper, Nas. Many fans have wondered why he hasn’t released a new album – yet alone a new single – in so many years, but finally we have some explanations to why he disappeared from the music scene.

As many may know, Nas was going through a nasty divorce back in 2010 to his ex-wife, Kelis, which caused him to fork out a total of $10,000 on child and spousal support every month. Now, for the very first time, the rapper opens up on what caused the marriage to crumble, how he dealt with it, Kelis dissing him on Twitter, not being able to see his son often and much more.

Catch the issue of Complex’s June/July issue 2012 and check out some excerpts from the interview below!

On when he knew his relationship with Kelis was over
There was a point where we were trying to hold onto a relationship that was finished. She was pregnant and in the studio while we were recording Distant Relatives, and he would move when the music would come on. That was a great feeling for me, just to have that feeling of family. It ended around the time the record was being done.

On whether he knew they weren’t going to make it as a couple
Yeah, but it was a problem I was attracted to. It was rock and roll. I saw Kelis as Courtney Love—but I also saw her as a mahogany queen. I saw us as a beautiful thing. I saw us as inspiration. People weren’t seeing hip-hop artists get married. A lot of people came at me crazy. But I think overall, we were inspiring people to love.

There was a lot that was thrown at her that she couldn’t handle. Like I was saying earlier, there’s a lot that I could tell my kids, but they’ve got to fish it out for themselves. Every night, she was in bed with Harvard. She was sleeping with Harvard. She had all the answers, but I needed something more from her, that she either wasn’t ready or didn’t know how to provide. Plus, she is younger than me and she hadn’t seen all the things I had seen. She was on her journey, I was on mine. In the beginning, I said, “There’s parts of this that might not work,” but there was a beautiful part of it, too. For the most part, I had a great time being married. It was amazing. She’s an amazing woman.

On  Kelis dissing him publicly
She did. Over Twitter […] the response was not good. There were bad tweets. She was angry. She was lashing out at anyone—and anyone she would lash out at, people automatically thought she was talking about me. My daughter would be calling me, like, “Dad. I’m on my way to school, and they’re talking about you on the radio.” My daughter wanted to tweet back and sh-t, and I told her to take the high road. It was ugly.

On their relationship now
It’s a lot better.

On whether he gets to see his son
That side is not great yet, but it’s working toward being that way. She’s a new mom. I’m busy and she’s busy. From what I see, she’s being a good mom, and it’s working toward a great place. There was a time when I couldn’t see him at all. It was terrible when the divorce was fresh.

On whether he hated her at any point
No. I got to a point where I was like, “Did she always hate me?” and “Did she ever love me at all?” I’ve got to admit, I did feel like that. But she did love me.

[…] A lot of divorces are bad because a woman is just being vindictive. She’s not after the money, she just wants you to hurt the way she was hurt.

On the money he lost in the divorce
It’s f-cked up when money’s involved in divorce. And I don’t give a f-ck. I can’t take it with me, so someone can take the money. Anyone that I’m married to, if I give you my life, I give you my heart, I love you—my money is nothing. You can have it all. It’s just sad that when you’re dealing with love and life and marriage, that marriage is a contract. It’s a business deal. That messes people up.

On whether he ever sees himself getting married again
Not right now. I’m enjoying life and looking at each day like, “This is beautiful.” I’m having a good time. I’m not going to bring anybody in to mess that up. You come around looking like you’re going to mess this good time up, you’re out of here—fast. [Laughs.] I’m not sacrificing my happiness for nobody and their drama. No way.
On his new track titled ‘Daughter’ and how guilty he feels sometimes
This is the first time I’m dealing with a teenage daughter, and it blows me away. I don’t know that you’re ever prepared to be a parent. Once you become one, that’s your responsibility. It’s more like me talking to myself, about how I could have been there a lot more. I beat myself up for not being the best I could be. I would ask her: “Am I a cool dad?” or “Am I a good dad? Did I f-ck up?” And she would say, “Nah, you’re good.” That’s important to me because I started as a teen. I was around 19 when her mother was pregnant. My daughter means a lot to me. It’s just a record that came from the heart.