Will Smith Defends His Actions Towards Reporter Who Kissed Him: ‘It’s Just Awkward’ 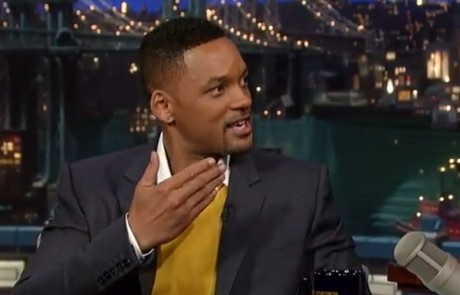 Last week, while promoting his latest movie, Men in Black 3 in Moscow, Will Smith was given several kisses on the cheek by a Ukrainian reporter. Smith quickly reacted by pushing the journalist away from him and before leaving, he added a slap while he laughed it off and moved on to the next journalist. After the video was posted on YouTube on Friday, it quickly became the most-watched video and everyone has been buzzing about it ever since, even David Letterman.

Letterman who had Will on his show, Late Show With David Letterman yesterday evening questioned the actor about the drama that went down last week. Smith seemed fairly relaxed as he answered the question, saying: “I didn’t beat up a guy! We’re doing an interview and he says, ‘I’m your biggest fan, can I have a hug?’ So I go to give this joker a hug, and he tries to lean in and kiss me! It’s just awkward.

The audience started to laugh before Will continued: “They were saying, ‘We’re sorry, that’s just his schtick’. Well that’s why his ass got schtuck.” A lot of people, however, have said that the actor had no right to push nor slap the reporter as he was only trying to be friendly — so, we want to hear from you?! Do you consider being kissed by a stranger friendly? We don’t know about this one… let us know below!