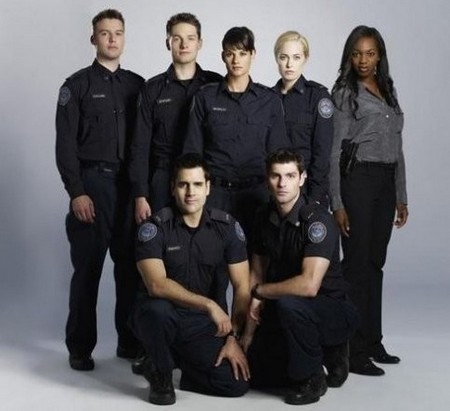 Rookie Blue returns tonight to ABC with the premiere of season 3 and I am so excited for the return my favorite actor William Shatner will guest star on tonight’s episode as a drunk driver.  Stand by as we live blog the episode with all the up-to-the-minute details.

On tonight’s premiere episode Andy’s real life comes flooding back when she returns to 15 Division after a three-month suspension, ready to face an official tribunal that will decide if she should be reinstated to active duty. Reuniting with her police family, she also meets her possible replacement – new rookie Nick Collins. A tense face-off with fellow officer Sam Swarek is interrupted when they are involved in a multi-car collision, caused by a very drunk driver, Henry McLeod (William Shatner), with a serious grudge against the police.

When a mysterious young girl vanishes from the scene of the accident, Andy connects her to a seven-year-old cold case. Will Andy-still on suspension – and the rest of the Division be able to find the missing girl and uncover the circumstances of her disappearance before it is too late? Whether Andy and Sam can reignite the passion they once had may be an even bigger question.

We will be live blogging the episode with all the up-to-the-minute details, so make sure to come back to this spot at 10PM to spend the evening with use!  In the meantime check out the sneak peek video of tonight’s episode below!

RECAP: Rookie Blue is one of those quiet little import shows that quietly toils along as other shows steal the limelight out from under it. Tonight was the first episode of season three and it kicked the season off right. The Rookies are actually all in their third year on the job and have their feet under them a bit more. Nick Collins is the token new guy and actually the only true “rookie” this year. He is coming to the force already having had a relationship of sorts with Gail. Lots of back-story there I’m sure. Tonight’s episode has him learning the simple of value of taking good notes and paying attention to all details in a case.

This episode begins with Andy jumping out of an airplane after getting called back to work after being suspended for three months. The irony of the tough police girl jumping out of a plane isn’t the least bit lost on me. Yes, it’s kind of clichéd but Missy Peregrym nails the role of Andy and you do believe this girl can do anything. She is headed back to the job after a few months and seems to have it in her head that things with Sam will be just fine. She chose her job over her relationship with him and I guess it never dawned on her that he might be carrying around same extra anger because of it.

Sam and Andy end up involved in a four car accident and this is where the whole episode begins to unfold right in front of your eyes. William Shatner is brilliantly cast as a drunk man whose driving caused the wreck. He is freaking out trying to get to a girl that is trapped in the back of a van involved in the crash. Andy gets the girl out as the van turns to a fireball and leaves her out of the way at the side of the road. The bulk of this episode turns into a mystery about this teen. She disappears (of course) from the side of the road and the unit needs to scramble to find out more about her and more importantly, the old mans connection to her.

This episode also lays the groundwork for the Andy and Sam storyline to try and have a relationship, the right way. He is obviously no longer working under cover and she has broken up once and for all with Luke after finding he had cheated on her. Lots of directions this serious can spin in this season. The writers have built a solid offering of characters here making Rookie Blue a definite gem that’s worth catching. It airs on ABC at 10pm on Thursdays.