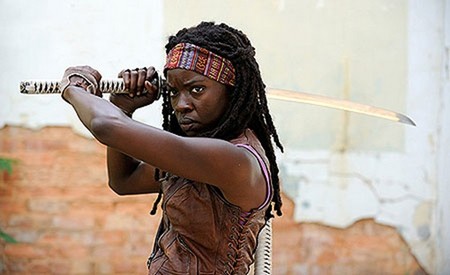 Just in case some of you are unfamiliar with “The Walking Dead” it’s a post apocalyptic zombie drama television series. It’s based on a comic book series of the same name, by Robert Kirkman, Tony Moore and Charlie Adlard.  We have a sneak peek video of the Waking Dead Season 3 and it is HOT!

The show is based on a small group of survivors trying to live through the aftermath of a zombie apocalypse. The survivors find them selves searching for safe places to stay at to get away from the hordes of blood thirsty zombies which is known as walkers in the show, they feast on the living and have bites that ’cause others to become infected and slowly turn into a zombie as well. The plot isn’t just about killing zombies, it’s mostly focused on the problems and situations they find themselves in and the decisions they make to get by them.

Now Michonne is one of the most popular characters from the comic who we finally get to see in Season 3 of “The Walking Dead” and she is played by Danai Gurira.

The picture above is Michonne and shows us a little glimpse of how she really looks because in the Season 2 finale, she showed up with her face hidden under a hood in the dark wielding a katana and two zombies chained behind her. Here’s a video to refresh your memory in case you’ve forgotten.

Apparently, Michonne’s interaction with Andrea is really going to be cool and I can’t what to see what these two ‘tough’ women kickin’ the walkers’ asses. I hear that Michonne’s character will play strongly on protecting the “prison” which Rick and company attempt to turn into their new home. Will she take over as head of the group and oust Rick?

I’m really looking forward to seeing the new season of “The Walking Dead” which will be airing October 25th, 2012, how about you? This time it will be 16 episodes long due to their fantastic ratings, more for us to enjoy!

Don’t forget Holly Hiccups will be covering the show LIVE with all the details, so come back and visit us for our recaps in the Fall!