Lea Michele: ‘I Have A Total Of Fourteen Tattoos’ 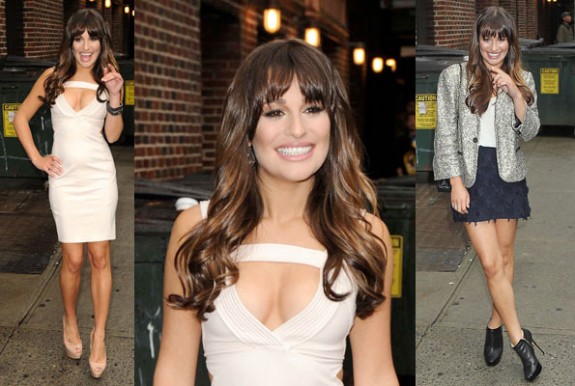 Before all of you Gleeks freak out about Lea Michele having fourteen tattoos, they are very small – or so she claims – but it runs in her family. Lea, who made an appearance on The Late Show with David Letterman earlier this week has said that having a tattoo on your body is traditional to her family, they all have at least one.

The most bizarre thing is that for special occasions when the whole family get together for Easter, instead of just keeping it traditional – the american way – they prefer going to get a tattoo done anywhere on their body. Typical Italians, right?

Michele continued: “For me, it’s weirdly enough a family activity. I come from a very big Italian family; tattoos are very popular. So, it’ll be, like, Easter, and we’ll be talking, and we’ll be like, ‘Let’s all go get tattoos!’

“Then we get super sentimental, and then the next day I wake up with another butterfly on my foot. And I’m like, ‘It seemed more important in the moment’… Some people go hunting for eggs and we go get tattoos!”

Michele, who is currently in a relationship with her co-star, Corey Monteith added: “You’ll still see the kids that this year were juniors; you’ll still see them next year in high school. And then you’ll follow the people who have graduated outside of high school, whenever they may go.”

“They’re all so little that you don’t see it. That’s why I’m done though, because all my secret hidden spots are done, like, my ‘real estate’ is over.” We wonder if Snooki has more than Lea. What do you think?! Drop a comment below!