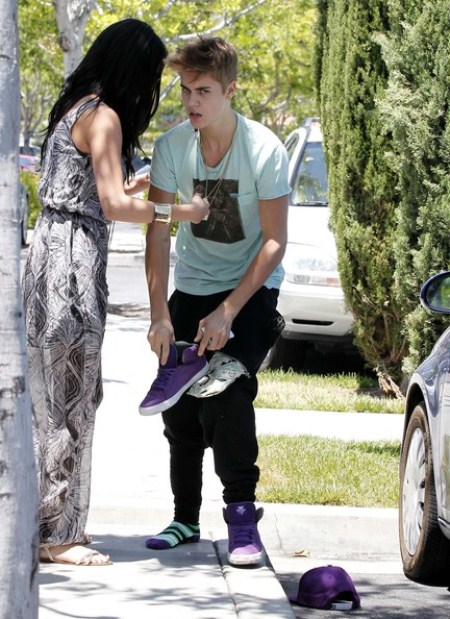 Justin Bieber told “The Hollywood Reporter” that days like he had this week, has made him think about about quitting the business for good, “There were so many times when I just wanted to say, ‘Enough is enough, I don’t want to do this anymore.'”

After this week’s altercation with a paparazzi, Justin was sought after by the cops about the fight with a person who was trying to take a picture of him and this not the first time he was rude to a person taking a picture of him. In February, two girls just wanted to take a picture of Justin because they were huge fans and he gave them the middle finger, this guy is just a natural at being an a*s to fans.

What will Justin do with his life after giving up music? Live his life as a lesbian transvestite by night and just a washed up singer who quit because he’s a b*tch by day? Who knows, the fact is, that this kid isn’t mature enough to deal with the fame he’s accuired.

When Justin went to promote his new album in England, he acted spoiled and insulted the man’s accent. He’s just not professional enough to have all this fame. How does having your picture taken hurt anyone? It’s just a damn picture, it’s not like the flash on the camera is going to blast a hole in your chest or make your eyes pop out of your skull; there is no reason for him to be so angry on these occasions.

If Justin does quit making music I can’t see it as a bad thing, because his music is not that good anyway and he just can’t handle the responsibilities that come with fame, so he might as well just leave already.