Prince William and Kate Middleton Are Ready For A Baby 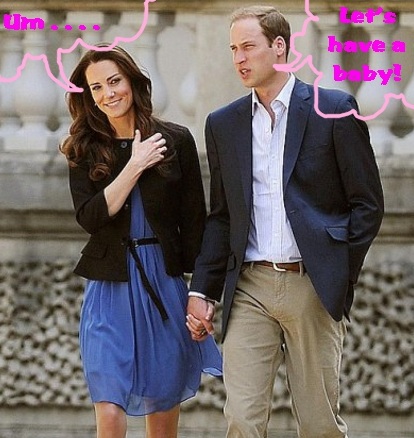 Prince William has been busy at his job in the Air Force and being a doting husband to his lovely wife Kate Middleton.  So what more could the royal couple want?  Just a baby perhaps!

Wills, 29, was quoted as saying that he is ready to start a family with his wife.   ‘I’d rather like to have children, so that’s the key thing really.  ‘I’m just very keen to have a family and both Catherine and I, you know, are looking forward to having a family in future.  ‘[Marriage] is all it’s cracked up be – no major arguments or domestics at the moment. It’s all going well.’

I’m sure I’m not the only one relieved to hear that things are going so well.  Williams’ younger brother Prince Harry, 27, is also keen to settle down sooner than later saying, telling and American ABC show:

‘I’ve longed for kids since I was very very young,’ ‘And so I’m just, I’m waiting to find the right person, someone who’s willing to take on the job.’

So who’s going to be the lucky lady for Harry to settle down with?  He’s been on/off with his ex-girlfriend Chelsy Davy for quite some time, so do you think the two are ready to commit?  I’m not so sure, in my books I say if it doesn’t work out the first time…well you know how the saying goes.

With all the excitement of Wills and Kate’s wedding, can you imagine what a baby would mean for the family?  That would be one epic birth!