Tom Cruise Caught In Bed With Another Women (Photo) 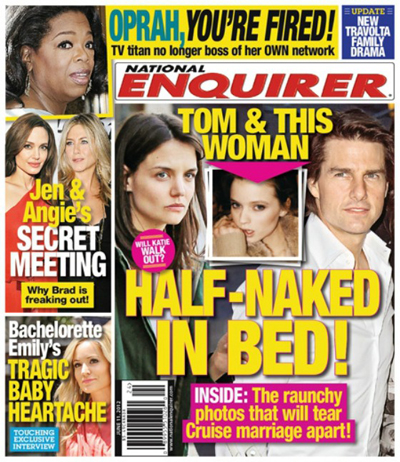 Tiffany Dupont. Who is this, I hear you ask? She was supposedly Tom Cruise’s mistress in the early noughties. She alleged that she also slept with George Clooney. People screamed, “No! Not a chance in hell!” Everyone forgot about the affair and moved on.

Now, new photos have surfaced of another woman who supposedly had an affair with Tom Cruise. The National Enquirer alleges that it has a “world exclusive” story on the whole thing. The cover’s headline, “Half-Naked In Bed!” is interspersed with a photo of Tom Cruise, a stressed out photo of Katie Holmes and the mystery woman, in the center, sultry staring back at the reader.

The National Enquirer promises raunchy photos that will “tear the relationship apart”.

Did Tom Cruise really have an affair with this mystery woman? Is Katie really as stressed out as she looks on the cover? After furthering investigation, the photos prove to be SO FALSE! The collective sigh of Tom Cruise fans can be heard around the world.

The photos are actually super-glossy images from W Magazine, with Tom Cruise having done a photoshoot for his upcoming film, Rock Of Ages. He cavorts in bed with famous models Abbey Lee Kershaw and Edita Vilkeviciute as Stacee Jaxx, the caricatured rocker from the upcoming film. A source alleges that Australian model Lee Kershaw reminds Tom Cruise of his ex-wife, Nicole Kidman and that the photos are sure to “stir up controversy”.

Can all of this be believed? Is Katie Holmes really at “the end of her rope” as reported last year in The National Enquirer? Tom Cruise has never been the sanest person on the planet, but it looks like his trustworthy image has not been blemished, yet. Reading the latest gossip news, one begins to wonder if Tom is really as squeaky clean as he pretends to be? Tiger Woods seemed squeaky clean.

Gossipcop.com claims the entire story surrounding Tom Cruise and Katie Holmes is “pure ridiculousness” and a rep for gossipcop.com says the latest Enquirer cover is “made up” and “completely false”. Tom and Katie have been married for several years and there have been no apparent troubles in their marriage, even though Katie has become a husk of the former film star she used to be. Time will tell how long this marriage will truly last, luckily we won’t have another Kardashian wedding horror on our hands any time soon.