Adam Levine Maximizes His Douchiness In A Recent Interview With ‘Details’ 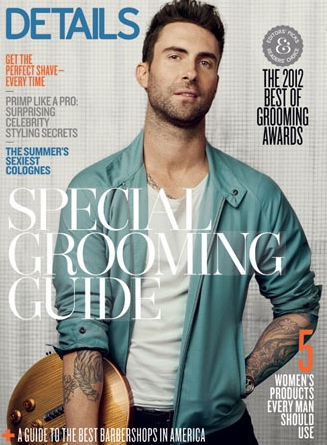 I’m sorry, but Adam Levine never fails to bring the douche-baggery to his interviews, and in his most recent chat with Details Magazine he didn’t disappoint. Levine is best known as the lead singer for the band Maroon 5 and, even more currently, as one of the judges on The Voice. While he does have a big mouth and, at times, can come across as over-the-top conceited, one should commend him on his comfortability in his own skin and his steadfast point of views.

He says a whole bunch of off the wall things in the recent interview. We’ve pulled a few of the highlights:

1. “There are men who are f**king misogynist pigs and then there are men who really love women, who think they’re the most amazing people in the world. And that’s me. Maybe the reason I was promiscuous and wanted to sleep with a lot of them, is that I love them so much.”

3. “I love attention. I can’t stand not having it. It just has to be the right kind.”

4. “Maroon 5 may not be groundbreaking—we’re not f**king Arcade Fire—but we did shit that other bands weren’t really getting down with.”

5. Do I really have moves like Jagger? F**king A, no, I don’t. But I was going to tell everybody that I did and hoped they believed me.”

What do you all think of Adam Levine? Are you as smitten with him as the rest of the population? Or do you, like me, recognize his tendency to be a self-obsessed (more than some) celeb?