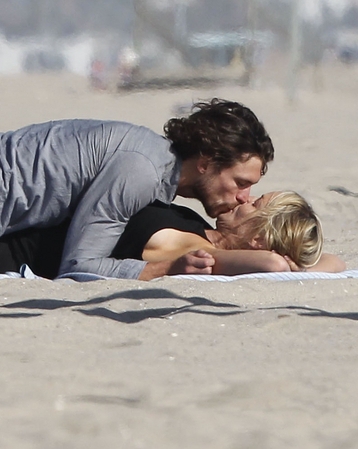 After Sharon Stone, 54, was spotted playing on the beach with Martin Mica, her new 27-year-old boy toy, I think we can officially say that she’s hit Cougar status.

A couple of days ago, the couple found themselves on Venice Beach, where they couldn’t keep their hands and lips off each other! Before making it to their sandy sanctuary, Stone and Mica were caught holding hands — just a pregame show for all the photographers following them waiting to catch a glimpse of the real action.

The couple apparently had no problem commencing their romance in the presence of cameras. Martin is a model and Stone is, of course, an actress most notably known for very scandalous film, Basic Instinct . . . so, I guess the two are familiar with being promiscuous around the cameras — what’s new with celebs? One thing’s for sure: the photogs and all the beach goers definitely got a hot show! To see more of the pictures click here.