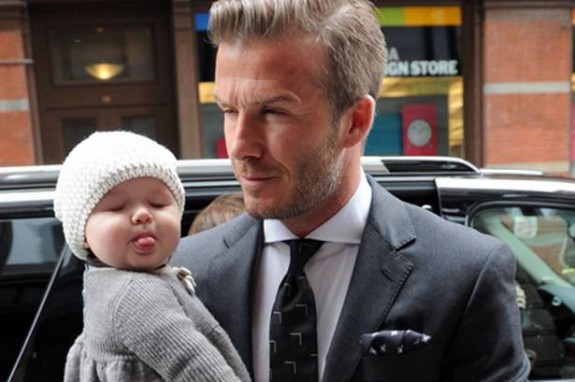 Give it a rest, please! Let the woman breath. Hah. David Beckham has said that he is not ruling out having another kid just because they recently had a daughter. Victoria Beckham and the family welcomed daughter Harper Seven in July 2011, the first girl that Vic has given birth to – she already has three boys; Brooklyn, Romeo and Cruz.

Harper, who will turn one next month, seems to be a very happy person, according to her father who explains: “She’s very smiley at home, I prefer her to be smiley at home than the other way round!

“She’s obviously had this perception for quite a few years, but she’s a happy person. She’s got a lot to be happy about, she’s got four amazing kids.”

David and Victoria are definitely becoming the new Angie and Brad Pitt, wouldn’t you agree. Meanwhile, in the recent photo shoot the athlete did with Elle magazine, he says he’s very flattered on being the first solo male to cover the magazine:

“It is a first, I was very honoured by that. I’ve done various things outside of football, and this was one of the highlights,” he tells the mag.

“To be asked to be on the front of one of the biggest women’s magazines around as a solo male, I was very proud of that. [Victoria] gives me tips [on photoshoots]. She was there on the day, I think she liked the cover.”