Pink Has Been Hospitalized With A Bad Case Of The Stomach Flu! 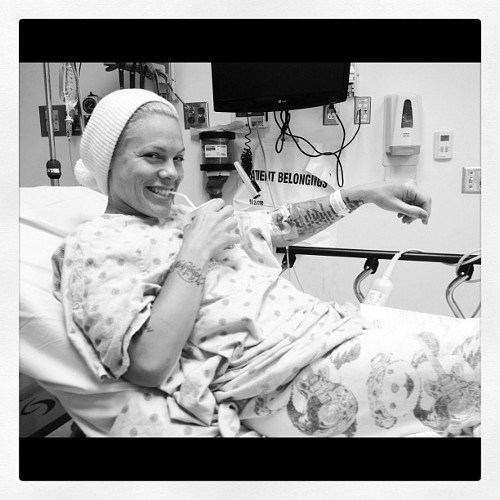 Pink has recently fallen ill with what seems to be a bad case of the flu. Yuck, no fun at all! The ‘So What’ singer took herself to the hospital and, after being hooked up to a an IV and with a drink in hand, tweeted a picture of herself in bed.

Underneath the tweeted photo, she wrote: “Maybe it’s cause my mum was an Emergency Room nurse all my life — but throw me in a gown and a hook me up to an IV — and I’m a happy girl. Stomach flu sucks but morphine doesn’t.”

After hundreds of people rushed to wish her well, the singer — real name Alesha Moore — said thanks, and she was quick to clarify her previous comment about morphine, saying it was all just a joke.

She wrote: “Thanks for all the get well wishes. And no-they don’t give morphine for flu. I might have ulcers again. Because I care too much. It’s a gift.”

Pink is not the only pop star to have tweeted from hospital recently. ‘In Da Club’ rapper tweeted a picture of himself surrounded by cuddly toys — including a giraffe, an elephant, and a lion — in a hospital bed after he, too, was taken in for treatment for a stomach virus.

Alongside the picture, he tweeted: “I don’t want to go into surgery.”

Rihanna has also tweeted a picture of herself hooked up to a drip after she was admitted to a medical facility suffering from fatigue.

Wow, there must be something in the aire. All these musicians falling ill. Get better, everyone!