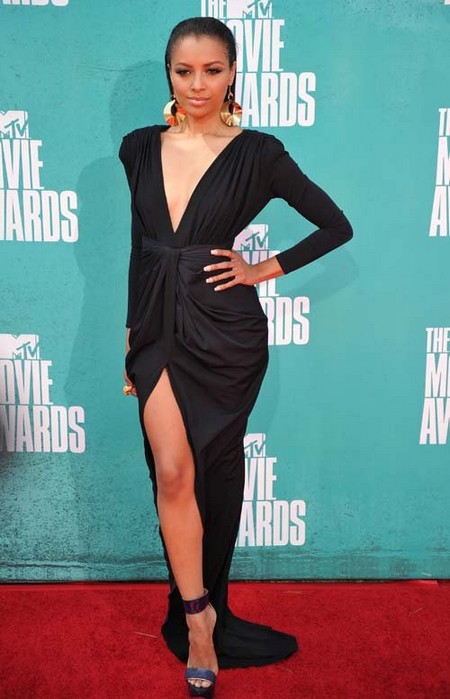 Kat Graham  who plays Bonnie on ‘The Vampire Diaries’ was handpicked to be MTV’s Special Style Correspondent on the red carpet before the show started.  She asked everyone who they’re wearing on the red carpet.

Johnny Depp was presented with the MTV Generation Award.  Johnny was introduced by Aerosmith front man Steven Tyler and guitarist Joe Perry to received the award for his contributions to the film industry and for entertaining generations throughout his career.

After watching a montage of his films at the ceremony hosted by Russell Brand, Johnny joked: “This is the get of the business award.  Based on watching all of those clips there is clearly something wrong with me.”

Johnny then surprised the star studded audience by strapping on his guitar and joining The Black Keys for a no-holds-barred rendition of the rock duo’s ‘Gold On the Ceiling’.

‘The Hunger Games’ was the big winner of the night, picking up gongs in four categories, Best Female and Best Male for Jennifer Lawrence and Joshua Hutcherson along with Best Fight and Best On-Screen Transormation.

‘Bridesmaids’ took home two awards, with Melissa McCarthy winning for Best Comedia Performance while the entire cast shared the Gut Wrenching Performance award for the scenes where food poisoning turned a wedding dress fitting in to a disaster.

Emma Watson picked up the Best Cast awards on behalf of her ‘Harry Potter’ co-stars while ‘Harry Potter and the Deathly Hallows’ was voted the winner in the Best Hero category.

Kristen Stewart and Robert Pattinson took home her fourth-straight win in the Best Kiss category for ‘The Twilight Saga: Breaking Dawn – Part 1’ while Jennifer Aniston was a surprise winner for Dirtbag of the Year for her role in ‘Horrible Bosses’.

The audience was also treated to a sneak peak of ‘The Dark Knight Rises,’ introduced by director, writer and producer Christopher Nolan, along with cast members Christian Bale, Joseph Gordon-Levitt and Gary Oldman.

Winners of the 2012 MTV Movie Awards

MOVIE OF THE YEAR