Rihanna Brings Out The Inner Bitch In Her As Chris Brown Is Mentioned In Her ‘Esquire’ Interview: ‘I’m Not Here To Talk About Messy Sh*t’ 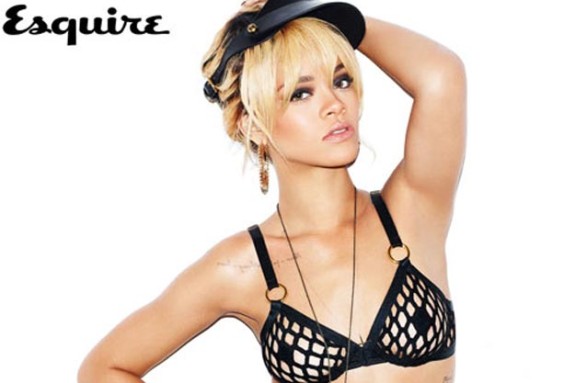 Rihanna is quite a wild one. The singer who’s covering ‘Esquire’ magazine’s latest issue had a pre-tty intense interview when her ex-boyfriend, Chris Brown was mentioned. The ‘Where Have You Been‘ musician didn’t appreciate it one bit and showed her true colors as she bitched about almost everything, changing her attitude to arrogant and cocky as she spoke about why she and Chris decided to duet on her song, Birthday Cake, knowing that her fans would not be supportive of that decision.

The interviewer was puzzled because his point was, if you’re going to sing songs direct at your ex-boyfriend, such as ‘Love The Way You Lie’ featuring Eminem and then all of a sudden duet with him on a song that talks about romping together, people are going to think you’re mentally ill.

According to friends who are close to Rihanna, she was saddened by the whole interview as it – once again – just revolved around something that happened three years ago, yet the interviewer did have a point since the Birthday Cake song was quite recent.The Barbados-born star explained: That’s how f-cked up society is. There’s a lot of sh-t y’all can’t get over. Y’all holding your breath on a lot of stuff that doesn’t matter.”

She continued: “When you realize who you live for, and who’s important to please, a lot of people will actually start living. I am never going to get caught up in that.I’m gonna look back on my life and say that I enjoyed it – and I lived it for me- and God. This is turning into a tacky interview. What do you really want to talk about? I’m not here to [talk] about messy shit.”

Check out the full excerpt below! You won’t believe what she has to say.

Esquire: What has been the Twitter response to the Chris Brown remixes?

Rihanna: Some love it, some hate it, some love it but hate that we did it. But the response in the end has been incredible.

Esquire: Was that [the recording session] the first time you’d seen him in a while?

Rihanna: When would we have seen each other? We’ve both been working and touring. [changes the subject]. This is really good food.

Esquire: It proved quite a controversial thing.

Rihanna: Well…definitely. Definitely. It caught me a little off-guard to be honest…especially the amount of…negative attention. Because it never occurred to me how this was a problem, you know. It really didn’t.

Esquire: Because enough time had passed that it was OK?

Rihanna: I thought people were gonna be surprised that we finally did a record together, but I didn’t see how people could think it was a bad thing, you know? In my mind, it was just music.

Esquire: Some people felt it sent the wrong message.

Rihanna: [Angrily] What was that? What message would that be?

Esquire: You’d gone back to someone who put you in the hospital.

Rihanna: [Getting angry] Oh really? Did I?

Esquire: You went and recorded with him, yes.

Rihanna: Okay. In a completely professional environment. And on a complete professional note. I mean, if I went back to him [as a girlfriend], then that’s a whole different discussion. And if I ever do, then that’s something that y’all have to talk to me about when – if – that ever happens. Until then, look at it for what it is. I think a lot of people jumped to an assumption that was incorrect and they ended up looking stupid.

Esquire: The assumption you were dating again?

Rihanna: Because of a song. How stupid. If I was together with every collaborator I worked with… f-ck my life.

Esquire: Still, the lyrics didn’t do much to dispel that impression. His opening line is “Girl I want to fuck you right now/been a long time/I’ve been missing your body”. You reply: “Remember how you did it/If you still want to kiss it/Then come and get it”.

Rihanna: That was the tone before he was even on the record. You think it was going to be about hopscotch or jump rope?

Esquire: So neither of you for a minute thought “This is going to put the cat among the pigeons”?

Rihanna: I could never see anything wrong with making music.

Esquire: Maybe the thing is that as an artist your personal and private life are intertwined, and you’ve already played on this. The first song you put out after the beating incident was “Love the Way You Lie”, about domestic violence.

Rihanna: Absolutely. But Love The Way You Live was me as an artist working with Eminem as an artist, telling our stories individually. On a track together. I’m lost. I’m confused as to what you’re trying to get at.

Rihanna: I know. And that’s how f-cked up society is. There’s a lot of sh-t y’all can’t get over. Y’all holding your breath on a lot of stuff that doesn’t matter. When you realize who you live for, and who’s important to please, a lot of people will actually start living. I am never going to get caught up in that. I’m gonna look back on my life and say that I enjoyed it – and I lived it for me- and God. This is turning into a tacky interview. What do you really want to talk about? I’m not here to [talk] about messy sh-t.

Esquire: What do your fans want to know?

Rihanna: It hasn’t upset me. It upsets me that you keep asking the same kind of questions about stuff that’s trivial. What’s there to talk about? Are all your questions like that? Let’s move onto the next one.

Esquire: It’s just that you haven’t given an interview for a while. A lot has happened.

Rihanna: You think I haven’t given an interview for a while? I did four this morning.

Esquire: Did they go any better than this?

Rihanna: We’ll see [when they come out] tomorrow