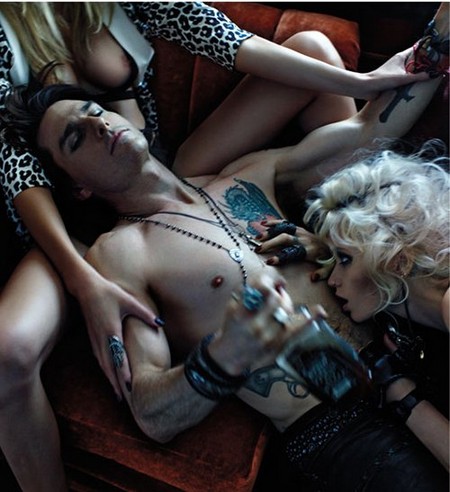 Tom Cruise is afraid of a split with Katie Holmes and he now wishes he could take back his overly sexy photo shoot.  Yes, the one he did with the two super-hot models, Edita Vilkeviciute and Abbey Lee Kershaw, to promote his new film ‘Rock of Ages.’

The sexually suggestive photos Tom consented to in fashion mag W  have led to the rumors that one of the models is trying to take her relationship with Tom to the next level.  Katie is hurt and jealous – and can you blame her? While she is stuck home rearing spoiled Suri Tom is out there posing half-naked with hot chicks.

The National Enquirer Print Edition June 6 reveals: They are the photos that will drive Katie Holmes wild with jealousy and tear the couple apart — hunky, tattooed Tom Cruise stripped to the waist and lying in bed flanked by two busty blonde models, one topless and nuzzling his naked chest!

In a bombshell world exclusive, The ENQUIRER has learned the 49-year-old actor’s controversial pictorial in the June issue of the fashion magazine W is sure to provoke a bitter battle with his 33-year-old wife.

It will make no difference to Katie that the photos are a promotion for Tom’s upcoming film Rock of Ages, say sources. The pictures are ultra-steamy, the models are ultra-hot, and she’s been stuck alone in New York caring for daughter Suri as Tom films movie after movie.

Cruise is featured on the cover of the magazine and on an inside spread as his movie character — fading heavy metal rock legend Stacee Jaxx. He posed in hot guitar hero mode — sporting hair extensions and makeup while chugging down on a whiskey bottle. There is a fake fire-breathing dragon tattoo on his chest and another of two guns down by his belt.

What do you think?  Does Katie resent Tom putting Suri’s innocence at risk when she discovers her daddy’s ultra-steamy pics?  Does Katie really care what Tom does?  Perhaps Katie would be relieved if Tom got a girlfriend and left her alone?