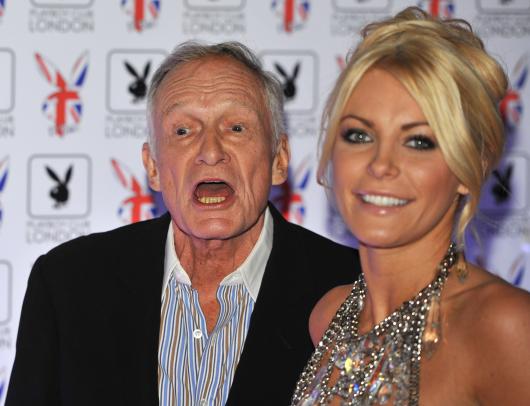 Crystal Harris has moved back in to the Playboy mansion and “worked things out” with Hugh Hefner one year after she was suppose to walk down the aisle – later canceling it at last minute.

The reality star had publicly bashed Hefner to several radio stations such as Howard Stern after she was asked to leave the mansion last year, where she said: “Then I was just over it. I was like, ‘Ahhh.’ I was over it. I just like, walked away. I’m not turned on by Hef, sorry.”

The interview went on to talk about Crystal’s sex life with Hugh which she described as “only lasted two seconds.” He later hit back at all the comments she was making about him saying: “Crystal did a crazy interview with Howard Stern today that didn’t have much to with reality. Is she trying to impress a new boyfriend?”

But now, the couple are back together and are a pair again. Crystal confirmed the news herself after a lot of people have been speculating what she could possibly be doing in the Playboy mansion, where she was spotted a week ago. On her Twitter page, the busty blonde explained: “Yes, Hugh Hefner and I are back together. Yes I am his #1 girl again. Yes we are happy. Hope that clears up any confusion! XO.”

The 86-year old later confirmed the news himself too by adding: “It’s Mary O’Conner that brought Crystal Harris back. Crystal was miserable and said so. Mary told Crystal to write and tell me, which she did.”

Are you shocked or happy for them? We don’t know about this but we have a feeling she’ll go through with the wedding this time around and take all of that money! The economy is tough so whatever Crystal has to do to eat good food, she must do it, right?! Ha. Oh – and by “good food” we mean expensive $1,000 meals.

Is Rihanna The Next Celeb To Pose Nude For Playboy?