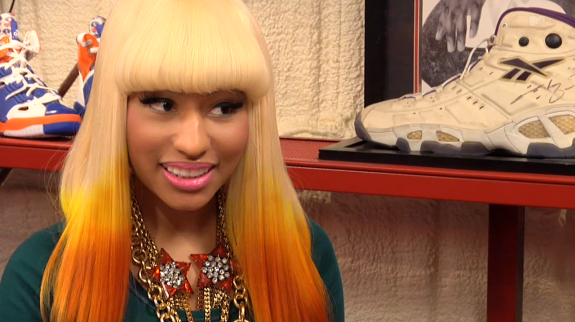 Wow. Nicki Minaj has put herself in some real mess. Over the weekend, the singer was scheduled to perform at HOT97’s Summer Jam, where she’d perform some of her biggest hits such as Starships, Super Bass and Right By My Side, along with a few special performances by Foxy Brown, Beenie Man and Lauryn Hill. However, her gig was later canceled after radio DJ, Peter Rosenberg offended the musician as he said:

Soon after his comments, the Young Money team went mad and within minutes, Lil Wayne decided to pull Nicki from the event because it was ‘disrespectful’ of Peter to do what he did. Minaj defended Wayne’s decision by hitting up on Twitter to explain why the entire Young Money crew refused to perform, saying:

“Wow. U ni–az just f-cked up history. But the President has spoken. #YMCMB. Had a HELL of a f-cking lineup. But we won’t b disrespected. I go above and beyond for my fans. But won’t ever go against wayne’s word. What he says goes.”

Her lineup was ridiculously long as she continued to rant on Twitter but one name she mentioned wasn’t actually suppose to perform with her. Lauryn Hill has set to the record straight on Minaj saying that a living legend such as Lauryn was to be Nicki’s supporting act (which is such a disrespectful thing to say):
“No disrespect to Nicki, but I need to clear up an inaccuracy. I was not scheduled to be a special guest on her set at Summer Jam, I was invited by Nas to perform with him. I don’t have details on exactly what transpired between the station and the artists, but I do support artists standing by their beliefs, and walking with integrity.”
She continued: “We have to find a better way to commercially exploit music, while giving artists their proper respect. This cannot be done while taking their contributions for granted, or trying to control the scope of their growth and power through threats and fear tactics. We can do better than this, there is a better way, or else ‘we’ (the proverbial we) find ourselves in danger of being hypocrites!!!”
Continue Reading