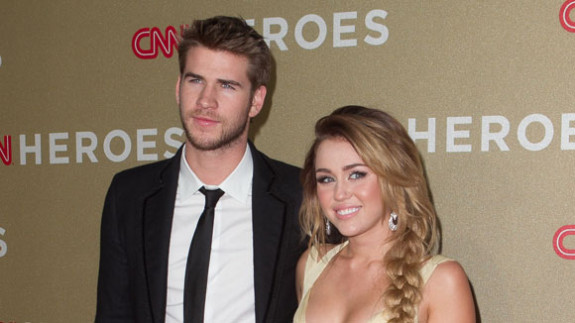 Miley Cyrus has announced that she will be walking down the aisle very soon, after confirming that Liam Hemsworth – her boyfriend of three years – had proposed to her last month.

The 19-year old singer who met the actor on the set of The Last Song, a movie they both starred in, was spotted wearing a ring on her finger but quickly dismissed rumors that it was an engagement ring… but she was hiding the news at the time.

Cryus and Hemsworth have had quite a rocky relationship, splitting up several times for unknown reasons. However, it seems that this time it was definitely a relationship that was bound to last forever. Speaking to People, Miley says: “I’m so happy to be engaged and look forward to a life of happiness with Liam.”

According to the magazine, Liam snagged up a beautiful 3.5-carat diamond ring from jeweler Neil Lane last month, before getting down on one knee and making the big decision at the age of just twenty-two. The couple are still yet to announce a date on when they are going to get hitched. Looking at both of their schedules, we’d say it’ll be beginning of next year.

Miley’s father, Billy Ray Cyrus took to Twitter to share his excitement upon finding out his daughter was soon to walk down the aisle: “All I ever hoped for as a Daddy was to see my kids reach their dreams. To find happiness…peace of mind …and someday know… true love.”