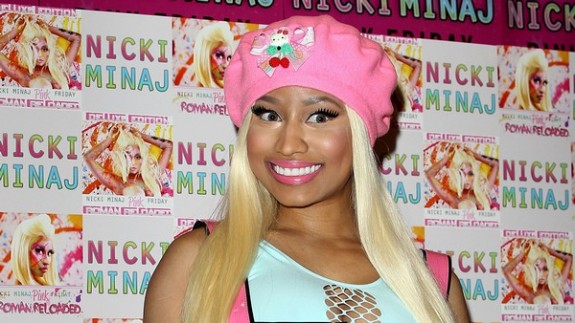 Nicki Minaj decided to clear up anything that was being stirred on Twitter – lies. Minaj was scheduled to perform at last week’s Summer Jam with artists such as Beenie Man, Lil Wayne, Foxy Brown to name a few.

However, she later backed out after a radio DJ insulted her by saying her music wasn’t real hip-hop – of course in a more rude manner. Many fans were furious when the singer refused to come on stage since most of the people in attendance had waited hours for her to arrive.

Earlier this week, with all the rumors that have been floating around, Nicki decided to hit up her favorite radio show in New York, The Breakfast Club to set to the record straight and explain herself since she hasn’t really had the chance to tell her side of the story since the incident went down. Check out Minaj had to say below – there’s a little bit of everything, an apology, drama and insulting rapper, Lil Kim.

On whether she really planned on performing ‘Starships’ that night
After all was said in done, I wasn’t going to do ‘Starships” and I think people know that, I mean I’m way smarter than that. I know what people wanted to see and I think it was just someone trying to be sarcastic, but like you said, it was horrible timing, it was in bad taste and everybody makes mistakes but you’ve got to own your mistake.

On linking up with Foxy Brown
I reached out to her a few months ago […] [Foxy Brown] has always been a part of my line up and I’ve known I was doing summer Jam for maybe a year now, so people are very crazy to think that this is something that I just decided to do. I’ve just always really loved her. I’ve always made it known how much I loved her and Lauryn Hill, and so when she found out about the drama, I thought she was going to be disappointed but instead she called me and was like ‘Yo Nick, I am riding with you, we are all here and were not leaving this hotel, we support your decision”, and that was how we all went out. Everyone came out to dinner with me that night and everyone supported the decision. Everyone was like. ‘Yo, Wayne was completely right and we made the right move.’

On whether she was really going to have a staged funeral for Lil Kim at the Summer Jam
[DJ Envy], I don’t even want you to finish that sentence because that’s not in my character and that’s ridiculous. Lets stop with all the rumors that are giving people false hope that they are relevant please. I’m not about to bring death on my stage, my stage is about life and love and that’s it, PERIOD. It was about us bigging up each other, myself and Foxy. No one, who is irrelevant was going to be made relevant on my stage.

On pulling the female card
I’m not using the female card. I am a female. Like, it is what it is, and like I said last night, you should think before you pass the only woman on the bill, something should have kicked in and said ‘You know what? Wow! This girl I may not like one or two of her songs but she is holding it down for every woman in Hip Hop right now at this moment’ and if you don’t understand that or respect that you are freaking stupid.

On whether she’s wants an apology from Peter Rosenberg
No, no, no, I don’t want an apology, I don’t care about an apology. the only thing I cared about was handling my business last night because Flex is right, I do handle my own I don’t ask anyone to speak for me and I typically go at things like a boss and what people don’t understand is that, me having loyalty to Wayne and Young Money and Cash Money that is a boss move and if you don’t have loyalty to your family, you will never understand what is to be a boss.

No one has the right to treat you like this. I don’t care who you are, and if you are working at a freaking top company and it doesn’t have anything to do with music and if you are walking into the boardroom and you are the only female in there and you hear men making fun of you and insulting you, you’re not going to walk into that room. You’re going to say, ‘you know what! check yourself and get your sh-t together because I’ve put my work in at this company just like every man here and until you can respect me, I’m not even sitting in that room’.

People were saying well you should have still walked on that stage and showed them, I don’t have to show them anyone sh-t, I don’t have to show sh-t, that’s one thing and its not happening anymore. I’m going to show you by what I don’t do. And what I don’t do is perform at a place where people don’t respect me. If the fans say one thing then let the fans say it but you don’t interject that thought into peoples minds before I come on stage.