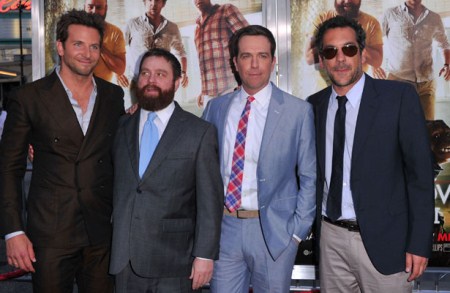 Remember that one movie that made you laugh so f*cking hard to the point you literally thought you were going to die of laughing, yeah that film was The Hangover and damn was it hilarious.

Now the second film in my opinion wasn’t as good as the first, sadly, it had it’s moments, don’t get me wrong – but it just really disappointed me compared to the first.

Here comes the good news, Todd Phillips will be directing the third and final installment to the franchise, at first we heard that the third film was going to be taking place in Los Angeles, but now it’s been confirmed that The Wolfpack will be getting a huge welcome back to Sin City, Las Vegas.

Here is some interesting information; the film will be shooting on and off in Las Vegas and a mental institution. Yes here’s a little spoiler to a part of the plot, the mental institution has Alan there and his friends will be trying to rescue him.

The most amazing original cast is back along with the director and damn am I ever f*cking happy to see that there going back to Las Vegas, hopefully this time the story will be completely different from the second concept because that one was a complete mistake.

Mike Tyson will also be returning and I can’t wait to see how he fits into all of this.