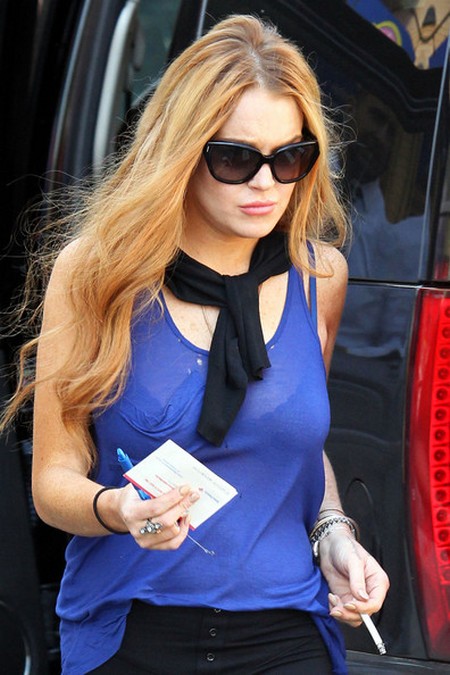 Lindsay Lohan was driving her black Porsche on the Pacific Coast Highway when it hit a large truck.  Lindsay is now claiming that the reason for the accident was her brakes failed and the driver of the truck cut her off.  The accident is becoming the usual Lindsay disaster, with the truck driver claiming that Lindsay tried to pay him off and Lindsay saying he is a big liar.  The truck driver, known only as ‘James’ has come forward claiming the troubled actress tried to offer him money to keep his silence as to the details of the crash — because, apparently, he says Lilo tried to leave the scene!

TMZ has more on Lindsay’s new claims:  In Moments following the accident, Lindsay claimed the semi-truck cut her off … and that is what caused the accident. The driver of the truck told TMZ that was not the case and has witnesses to back up his tale.   According to our sources, Lindsay is sticking with the “truck cut me off!!!” story, but with a twist … she claims she slammed on the brakes … but nothing.  And get this … somehow Lindsay says she was told the brakes on the rental were replaced two days before the crash.

What do you think is there more to the accident than Lindsay is admitting?  Was Lindsay just not paying attention and she caused the accident or is Lindsay back to her old tricks drinking and drugging?  Hit the comments and let us know your thoughts!