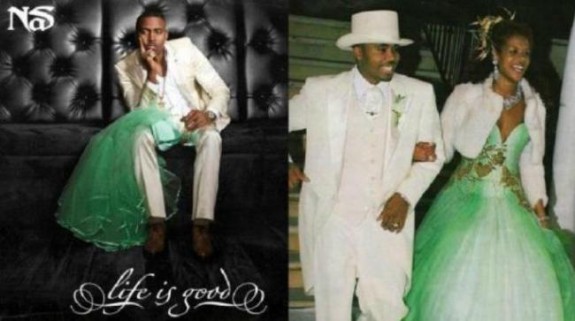 Nas‘ ex-wife and singer, Kelis seems to come across as one mean and feisty woman. The R&B singer finished Nas’ money when the divorce was finalized, making the rapper pay out hundreds of thousands on child support and since they didn’t sign a prenup, she managed to get her hands on all the luxurious things and more.

However, three years after the nasty divorce battle, Nas still can’t get over it, as seen in the picture above, showing the rapper with the wedding dress that Kelis left behind in 2009. That was the ONLY thing she left behind.

Nas is a very successful artist, his albums have always done extremely well in the charts. Knowing that the picture is being used for his album over, Life is Good, it seems that he is trying to get revenge on the woman who took it all from him. A lot of people had themselves scratching their head, why would Nas do something like that? Well, he has an explanation for it all.

Nas spoke with Mina Saywhat at Philly’s Power 99about it and he said: Yes, it was the real dress [in the picture]. It was in the crib. I didn’t know what to do with it. I don’t think Kelis intentionally left the dress there. I think that was just one of the things that was left behind. I saw it, and it was like ‘wow’, and it’s still in the crib so…

I’m not sure if she left it on purpose or what, but I thought it was a good one. I was like “ohh she stung me with that one.” I been through things [that] I thought only happens on TV.