Snooki On Pregnancy: ‘I’ll Not Drink And Refuse To Go Tanning Until Baby Is Born’ 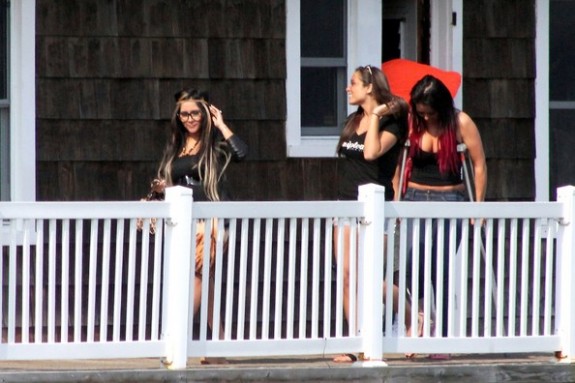 Jersey Shore starlet, Nicole ‘Snooki’ Polizzi, has said that she will not be seen drinking on the upcoming season of the MTV hit show due to her pregnancy to fiance, Jionni LaValle. The reality star, who is set to give birth in August, is currently held back in Jersey, where the cast of the show are filming its sixth season — Nicole reportedly signed on to the show’s newest season because there was a hefty paycheck involved.

Despite her going back to the Shore, she’s not staying with the cast members, she has her own place. Now, you’d expect Snooki to get wild, go tanning and drink but no, she’s doing the exact opposite. Taking a a day off filming, she reveals to Good Morning America: “Obviously, no drinking, none whatsoever… I’m scared to even have caffeine.”

“Pregnant people shouldn’t be in a bar, I feel. My friends were like, ‘You can have a glass of wine’ and I’m like no, I refuse. I’m going to be that person who has a glass of wine and [the baby] comes out with three legs. I just don’t like to be around people who drink because then I’ll be like, ‘Cool, I miss it’,” she continued.

Oh – and that’s not the only thing she’s stopped doing. No more orange looking faces for the next few months either, Snooki says that she has quit the tanning salon until the baby is born. She says: “I use bronzer on my legs… I’m actually embracing the paleness that’s coming along with it. It’s kind of a new look,” she said.