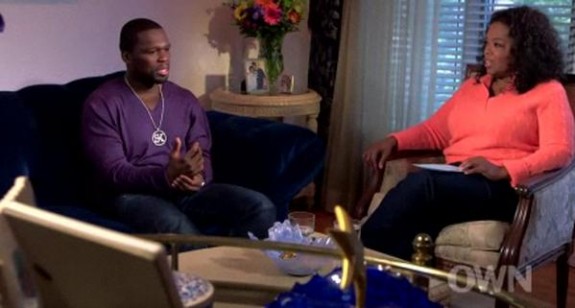 50 Cent has proven – not only to Oprah Winfrey – but also to the world that he has matured from his ‘Get Rich Die Tryin’ days. The rapper sat down with the talk show queen to talk about his childhood, how he’s handled fame, his incredible fortune, his mother being murdered at the age of just eight, why he named his dog Oprah (funny, right?) and so much more.

The interview was definitely a good one. 50 Cent, real name Curtis Jackson, is the second rapper to have appeared on the OWN network – Jay-Z being the first – which is a big honor knowing that Winfrey’s interviews are never really focused on rappers. Whatever the case, Custis has definitely changed, the more matured personality he has in the interview proves it all.

Check out some excerpts from the interview below + the full interview with Oprah below!

On buying Mike Tysons home:
It’s huge, 15,000sft. It’s really a reflection of my experience being in such a small space prior to that. It’s like confirmation of success for me.

50 on his feud with Opera:
I would see moments where you would discuss your views on [Hip Hop] culture, and everything that was wrong with the culture was on my CD, I was like ‘Oh she doesn’t like me.” I’m looking and there are so many impressions and different points. Not to say that those things were wrong, but if I can’t be your friend, let me at least be your enemy so I co-exist. I was using it as a strategy.

I would say there is a conservative audience that could care less that their kids are listening to my music. Kids are not sure they should be into the same thing their parents are into. They look for something that allows them to be a little rebellious, like Rock and Roll. I had to create a reasoning why it was so many white women in the actual audience. I was like ‘You know what they look at? When she says things they actually identify with they say, yeah that’s right, Oprah’s a billionaire, I think like a billionaire.” Regardless of how they feel they identify with you being a woman.

On the N-Word
I think when you’re using it with actual malice in your heart, you can feel the difference. When a woman is getting dressed and she says “Hey b-tch hurry up,” you don’t feel like you feel when a man is saying the word to you. Its degrading, and it actually hurts, and the same with the word n-gga. At that point that it’s being used by someone that you know, it isn’t used in a racial term, it doesn’t impact the same to the person that is hearing it. Think about the misogynistic lyrics in hip-hop culture. Why are the women dancing? They run the show. In the night- club environment if the girls don’t respond to the music [it doesn’t get played].

The difference between Curtis and 50 cent:
The difference is 50 Cent wouldn’t actually be able to exist. He would be already in jail. It’s the mentality that lives in the environment that keeps the doors revolving in the penitentiary. All of the dysfunctional behaviors that were in the actual environment that I grew up in.

50 on Death:
I’m not afraid of dying. I’ve accepted that I’m not in control. When you have that type of situation (being shot 9 times) take place or happen to you and you don’t have an answer, you go to your concept of your higher power. You say there is a plan for you. Either pray or worry. Don’t do both. If you’re gonna sit there and do a prayer, and then worry about it, how does God feel about you? He knows your sitting there worrying.

On naming his dog Oprah:
At the time I was just looking at the situation and I said I was developing negative feelings for someone who doesn’t even know me. I gave it to the dog because I was excited about the dog at the time. I take pictures and say crazy stuff on twitter, but it would impact cause they would associate it with me saying it to you. [Oprah: I heard you had a b-tch name Oprah]

Who 50 loves
I love my grandmother, my grandfather. My grandma, I’ve always had a connection with her. I used to sit there and rub on her feet, even paint her toenails.

On being in love:
I thought I was. I learned to love my son’s mom. I wasn’t actually in love with her when she conceived the child. I learned over time to be comfortable with her.

Oprah: Have you ever been in love?

Lindsay Lohan Ready To Be Spiritual And Honest? At Least, That’s What She Tells Oprah