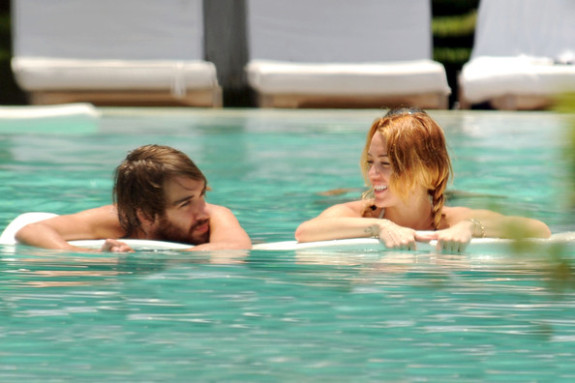 Miley Cyrus has said that the reports, claiming that she’s already cheating on Liam Hemsworth, despite only getting engaged two weeks ago. The singer, who proudly flashes her $250,000 ring around Los Angeles, was fuming on Twitter yesterday after she was photographed with a friend at the swimming pool.

The male friend whose name is Cheyne Thomas is said to have been a friend for several years, he also gets along very well with Liam and there’s definitely nothing to it but a great friendship, according to Miley.

“I love my fiancé & he loves me,” she wrote. “All the rest is bull s**t. We get to live a life of happiness no one can take that away from us.

“So now because I am engaged I can’t have a friend of the opposite sex? can’t have a friend help me out while I’m working alllll day? #dumb. Maybe YOU would have friends too if you’d get your face out the tabloids & start living your own life 🙂 unfortunate.”