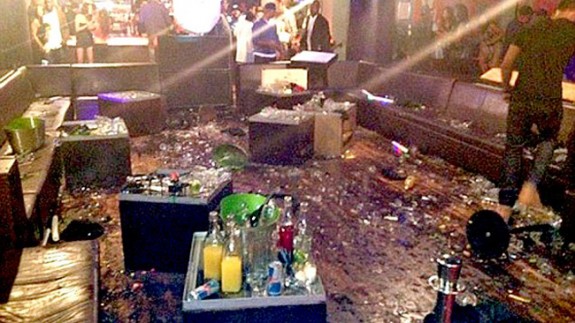 It didn’t seem to be too serious when it was first reported Chris Brown had gotten into a fight with Drake and his entourage yesterday, early in the morning. The two musicians, who attended the same New York nightclub with their friends, partied until early morning when Chris allegedly bottle of champagne over to Drake’s table as a peace offering (referring to him having a fling with Brown’s ex-girlfriend, Rihanna).

The rapper then made a cheap move to send a bottle of champagne straight to the singer with a note that said:  “I’m f****** the love of your life, deal with it,” which got Chris fuming — going up to Drake and confronting him about it — which soon later got Drake to throw the first punch.

No one had thought it was as bad as it was until pictures of the Chris’ bodyguard and a tourist from Australia were pictured with blood coming down from their foreheads.

It’s fair to say that Chris managed to get away with the lightest injury while his bodyguard seemed to have gotten the worst of it all (see pictures below). Drake’s team later released a statement, saying that the rapper was not involved in this situation, which read:

“Drake did not participate in any wrongdoing of any kind last night at W.I.P. He was on his way out of the club when the altercation began. [Drake] did not engage in any activity which resulted in injury to person or damage to property.”

The police are still investigating the situation — to be continued…

UPDATE: A close friend to Rihanna has said that the singer is distraught about hearing the two were fighting over her: “When she heard they were fighting and apparently over her, she shook her head and was like, ‘You’ve got to be f**king kidding me’.”

“She clearly doesn’t want anyone fighting and especially not over her. She saw the pic Chris tweeted and her face turned upside down. She’s a little distraught over this and hopes both of them are all right.”