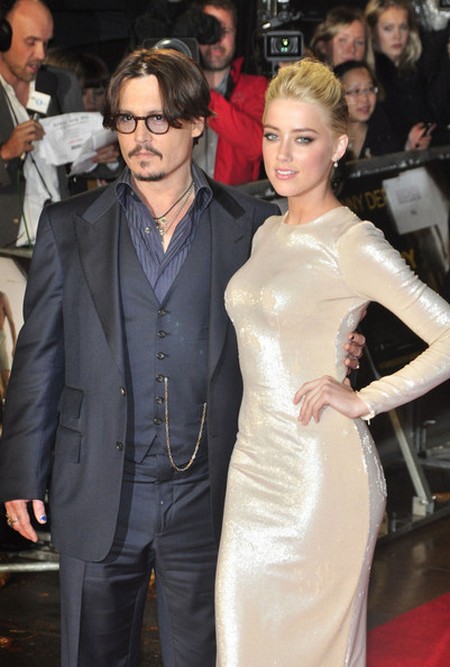 Johnny Depp is doing it all with self-proclaimed bisexual Amber Heard and doing nothing with Vanessa Paradis, the mother of his two children, Lily-Rose Melody Depp and Jack John Christopher Depp III. That is why Vanessa is heartbroken and Amber is laughing.

Johnny and Vanessa have been denying that this split rumor is true but they are not telling the truth. Vanessa and Johnny are rarely if ever seen together anymore. Even when they are in the same city are not seen together – some couple that is… Johnny has had alleged hookups with women apart from Amber such as Ashley Olsen and Eva Green. Vanessa has maintained a discrete silence on all of Johnny’s flings.

The Chicago Sun-Times reports: “Last month there were also rumors that Amber and Johnny had a hot Las Vegas hookup, and Amber was even photographed getting onto Johnny’s private plane. I don’t even know. My guess is that Amber is bisexual, not full-on lesbian, and that she and Johnny did have something going, on and off, no strong commitments. Of course, I also think Johnny is in the midst of a full-blown midlife crisis, so I’ll believe pretty much anything.

In the meantime, Johnny continues to film The Lone Ranger, which has gone incredibly over-budget and weeks behind schedule. You can read more about it here – it sounds like Johnny is having some issues.”

So what do you think? Is Johnny doing Amber? Are Vanessa and Johnny finished as a couple? Let us know in the comments below.