Hollywood Dirty Divorces – How The Millions Will Be Split 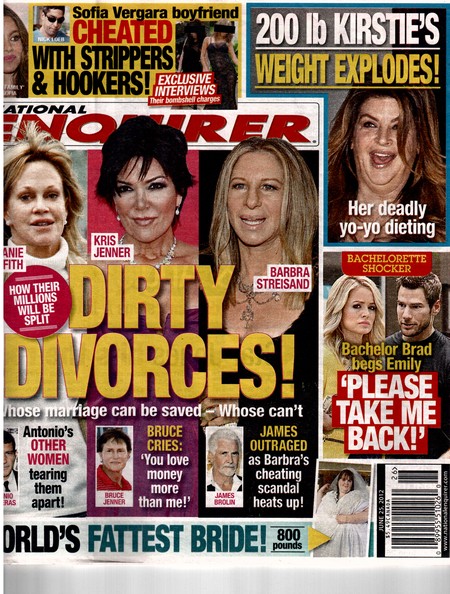 The National Enquirer has the cover story this week – Hollywood’s Dirty Divorces.   The three divorces featured are Melanie Griffith, Barbra Streisand and Kris Jenner.  Apparently Melanie’s husband cheater mcheater Antonio Banderas and his roving eye and his other women have been tearing their relationship apart.  James Brolin is outraged at Barbra’s cheating scandal heating up and Bruce Jenner thinks that Kris Jenner loves money more than him.

The National Enquirer Print Edition, June 25 reveals the inner workings of the sick relationship between Bruce and Kris: The 21-year marriage between the Kardashian clan matriarch Kris Jenner and husband Brice Jenner is imploding over money – and insiders fear the feuding couple may split!  Mom-ager Kris, 56, is so fixed on fattening the family coffers that according to a source “Bruce recently cried to his wife, ‘You love money more than me.’”

James Brolin exploded when Brabra announced that the womanizing politico Bill Clinton would be the special guest at a ritzy bash at their Malibu estate.

The Tension between Antonio Banderas and Melanie Griffith is bearing a crisis point over feats he’s cheating – and pals say the Hollywood power ocple is not on the bring of a $50 million divorce.

On thing for certain if these couple actually make it to the divorce court they could develop into one of Hollywood’s messiest divorces ever!