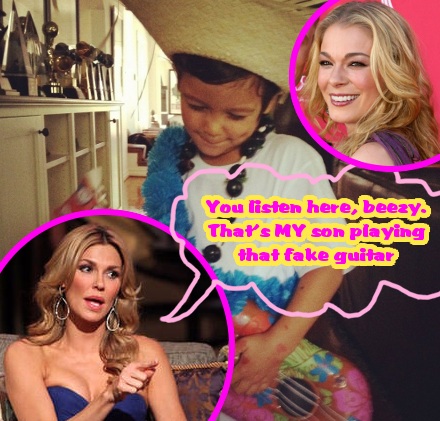 LeAnn Rimes and Real Housewives of Beverly Hills star Brandi Glanville hate each other.  LeAnn did a repulsive man-grab and stole Brandi’s ex-husband Eddie Cibrian just like Angelina Jolie stole Brad Pitt from Jennifer Aniston.  And just as Jen has never gotten over losing Brad, Brandi has never gotten over losing Eddie.  What makes this situation even worse for Brandi than for Jen is that Brandi’s kids are often under LeAnn’s control… and LeAnn is such a bitch that she uses this to get at Brandi.

LeAnn Rimes has said she was scared of Brandi and that she feared for her life. Brandi has let it be known how she feels about the country music star and her feelings are nothing nice.  But who can blame her?  Certainly not me.  After all, right after LeAnn stole Brandi’s husband she threw salt in the open wound by saying she wasn’t sorry for the affair.

LeAnn recently tweeted a pic of her step son (Brandi’s son) in Hawaiian clothes to Brandi and said “Had to share his luau fabulousness!!!! Mom and he are gonna rock out today. @brandiglanville have Fun!”  Brandi said nothing in response. Her silence was deafening.

Let us know what you think of all this ugliness between Brandi and LeAnn in the comments below! And what about Eddie?  He is a creep and a half too.