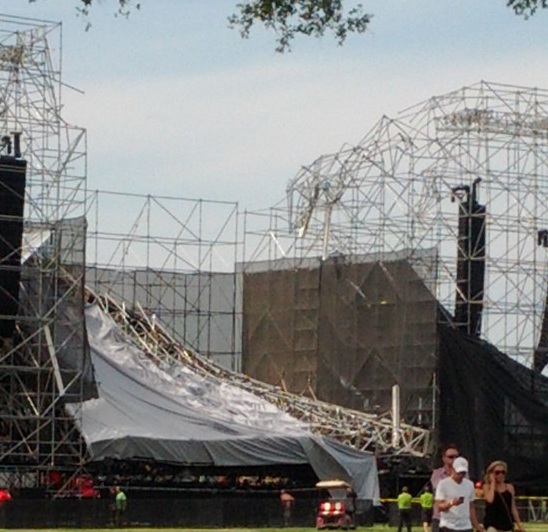 The band Radiohead had a concert stage collapse yesterday – tragically killing one and injuring 3 others.  The accident happened right before the band was set to take the stage in Toronto Saturday.

Two others were injured and getting checked out on the scene. According to the police one was treated at the scene and the other one was taken by ambulance to a hospital.   The concert was set to take places at Downsview park in Toronto. It was sold out and has since been canceled.

The area had to be cleared by medical personal and others on scene to secure the area. Even though the concert hadn’t started there was a sizeable crowd already there.

The band took to twitter to announce the show was off due to unforeseen circumstances.

The band Radiohead was formed when the group was all in school together at Abingdon school. A independent school for boys in Abingdon Oxfordshire. The band was formed in 1985 and is still together today.  There style of music is British rock.

The roof of a outdoor stage collapsed during sound checks and rehearsals. No one from the music group was hurt or injured. A man who died on scen was said to be in his 30s another man Was rushed to the hospital believed to be about 45 with non life threatening injuries.

The roof the collapsed was said to be a round arch thing made of round piping similar to what’s used for scaffolding the structure was rigged with lighting equipment which made it very heavy that’s the piece that fell to the ground.

Toronto was the last stop for Radiohead’s North American tour.

Zoe520 posts0 comments
You might also likeMore from author
Empire