Rihanna To Do An Intimate Interview With Oprah Winfrey, Set To Talk About Chris Brown And Partying 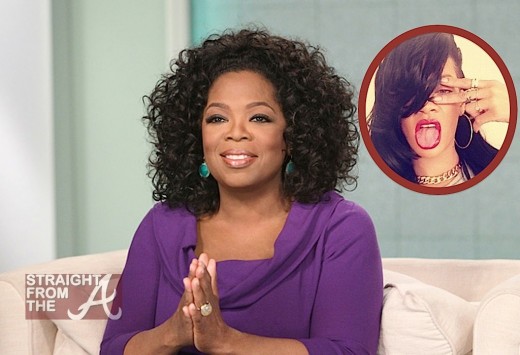 When Oprah Winfrey calls, you pick up! No matter where you are, who you are, or what situation you are in. You pick up your phone. Now, that Oprah has interviewed 50 Cent, Paris Jackson, Bobbi Kristina and The Kardashians for her show, Oprah’s Next Chapter, which is doing very well in the ratings, it only made sense for Winfrey to target the next big star, Ms. Robyn Rihanna Fenty.

The pop star, who has had twenty-two top ten hits, according to Billboard officials, is set to do an interview with the talk show queen after being approached by the offer a week ago. The topics that are already being lined up are, her relationship with Chris Brown, her early childhood, her constant outrageous partying and not to forget, the recent brawl Chris had with rapper, Drake – allegedly because of Ri.

Oprah is pulling out every move she can, in hopes that people will continue to watch her shows. Before her latest show aired, the programmed shows on her network, OWN, were not doing too well. Most, such as the Rosie O’Donnell show, failed to impress viewers and didn’t even manage to hold an audience of 1 million despite its big budget production. So sad.

There has been no official word on if Rihanna will take the opportunity to do an interview with Oprah or not, but if Ri is smart, she will do it and there’s really no doubt in our mind that the singer will do it. How about you, do you think she’s up for it?!