Sharon Osbourne Breaks Down On The Talk, Discussing Son Being Diagnosed With Multiple Sclerosis 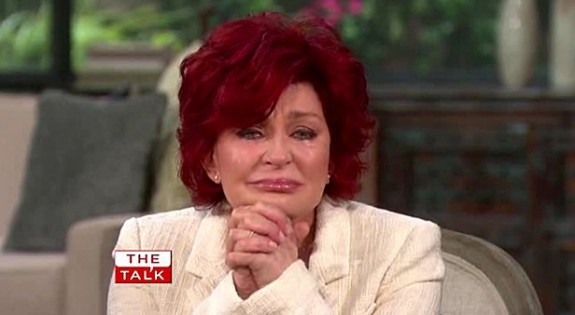 Just weeks after welcoming a healthy, young baby girl, Pearl Clementine to the world, Jack Osbourne announced to People that he has been diagnosed with multiple sclerosis – that has affected his right eye to lose its sight by %60. His mother, Sharon Osbourne has spoken out on how she feels about the whole situation on the daytime talk show, The Talk, where Sharon continuously sobbed as she tried to speak.

Of course, any mother would be finding this painful to hear. Having multiple sclerosis is a serious thing. It mainly affects the nerve cells in the brain and the spinal cord, which means that Jack could end up having to live the rest of his life using a wheelchair, and have an assistant with him at all times to help him do minor things such as going to the bathroom, making a cup of tea, etc.

Just about holding it together, Sharon says: “[Jack’s] doing really, really good and I want to thank everyone for all their texts and goodwill and love they send to us,” Sharon said between sobs. “It’s been amazing for Jack because I really believe that… prayer really helps. And what I’m doing right now is not helping because I’m just feeling sorry for myself, and that is no good.”

Jack has been scheduled to appear on the CBS show tomorrow morning, explaining his condition and to talk a little more about what multiple sclerosis is. No doubt in our minds that the engagement he had planned is definitely being put on hold now. We wish the family and Jack all the best.