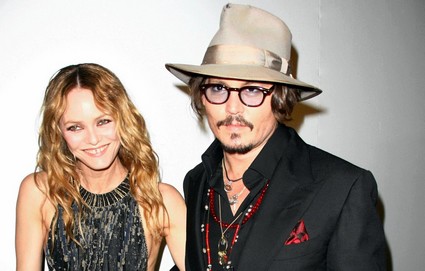 The union between The Pirates of the Caribbean actor Johnny Depp and his long-time partner  Vanessa Paradis has at last has gone awry. Johnny Depp, 49, and his French actress/singer  partner Vanessa Paradis, 39, have been in the same relationship for 14 solid years and produced two lovely kids; Lily-Rose and Jack.

According to Johnny’s rep: “Johnny Depp and Vanessa Paradis have amicably separated“even though they have both always denied cracks in their relationship. Johnny at London when asked about his rocky relationship said: “The rumours are not true. They are absolutely not true. No matter what I say, people believe the opposite. I can’t say enough about it not being over.”

Amber Heard has taken over from Vanessa – a new chapter of the actor’s life has begun and she was spotted boarding the actor’s private jet at Las Vegas early this year.

The news that the couple had been living single lives and staying in different hotels in the same city emerged in January.  The break-up was precipitated due to Johnny being romantically with The Rum Diary co-star Amber Heard, 26, in April 2012. The relationship between Depp and bisexual Amber Heard started during the shooting of The Rum Diary in Puerto Rico.

Amber who stepped out of the closet with her lesbian partner Tasya van Ree in 2010 said “When it comes to love, I’m totally open.” Of her co-star Depp “He’s a wonderful artist and such a talented person. He’s charming“.

Vanessa Paradis reportedly had to put her career as a singer on hold in order to care for their children. She says “I could make an endless list of all the things I admire about him, we understand that, if we want our relationship to continue, we must give each other space and trust each other.” On the reason why they never formalized their union “I love the romance of ‘Let’s get married’. But then, when you have it so perfect… I mean I’m more married than anybody can be — we have two kids. Maybe one day — but it’s something I can really do without.”

So much for all the Hollywood publicity bullshit!

Zoe520 posts0 comments
You might also likeMore from author
featured