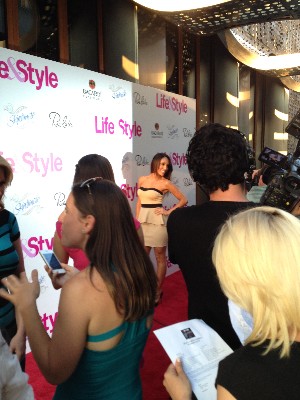 Real Housewives of New Jersey stars Melissa and Joe Gorga were among the many hot celebrities that made an appearance at Life & Style Weekly’s Summer Style party at the Dream Downtown hotel in NYC last night. CDL was there and we have exclusive pics of the star-studded event! Melissa hammed it up for the cameras in a skin tight beige, strapless peplum dress while Joe kept it casual with jeans and a T-shirt. They worked the room like nobody’s business, stopping to schmooze with 30 Rock’s Katrina Bowden and fashion guru, Robert Verdi.

Also stepping out that night was Fashion Star winner Kara Laricks, Pregnant in Heels maternity concierge, Rosie Pope, Glee star Chord Overstreet and surprise guest, Khloe Kardashian. Khloe kicked it with sometimes troublemaker on Keeping up with the Kardashians, Jonathan Cheban. The stars sipped on low-calorie mojitos and pina coladas and noshed on some sweets from the adorable, spring-colored cupcake display. They also took turns getting their famous mugs taken in the photo booth and getting sprayed from super hot guys with Calgon body mists. Sounds like a blast!

Although we aren’t sure of the winners yet, the event hosted Life & Style’s summer style awards. Fans had until June 7 to vote who they thought was the trendiest TV star, best designer bag designer, most glamorous red-carpet designer and many more! Unfortunately none of the best red-carpet style nominees including Michelle Williams, Beyonce, Eva Longoria or Selena Gomez could make it to the soiree. Maybe we’ll spot them next year!

Check out our exclusive gallery of all the stars below!