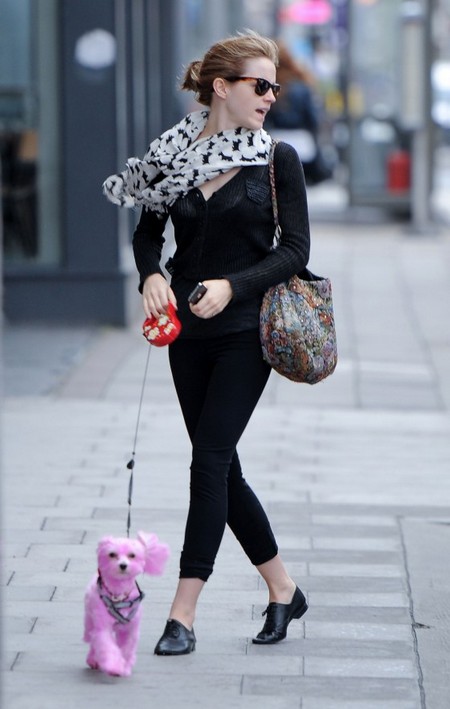 Last week, Emma Watson raised eyebrows when she stepped out in London walking a one-year-old Maltese terrier called Darcy that had been dyed fuchsia.  When photos of the actress and the pooch popped up online tongues started wagging.  Some fans love the ideal of colorful dogs but animal rights activists’ think it borders on cruelty.

Groom Dog City Looks, is tucked in a famous corner of East London, near the famous Columbia Road Flower Market.  At first glance it looks like your typical groomers and once inside it also sounds very typical.  Stuart Simons owns the business and is the man behind the dyed pups.  When the photos of Emma hit the web he even received abusive emails from activists’ who insist the process is cruel. Simons also points out that the dye itself in no way harms the animals, but specialists’ are concerned that it can alter the way other dogs will approach and interact with them.

“Dogs are intensely visual creatures, and I have no doubt they would be aware of a major colour change, particular green and blue hues which their eyes pick up more. It would likely affect the way other dogs interact with them, too — we know that dogs even interact with other breeds differently due to physical appearance, such as bulldog breeds with their squashed noses. In my opinion, it is a step too far. We should let dogs just be dogs.” says Dr. Roger Mugford, a leading animal behaviorist.

Simons isn’t worried about the naysayers.  The former musical theater actor has been offering the service for two years now and says of the dipping process, “You can’t use human dyes on dogs. It wouldn’t be safe and can compromise their immune systems.  People complain it’s cruel but there is nothing in the dyes to harm them, and we always do a health check beforehand to make sure they don’t have allergies or skin conditions.  If they’re already coming in for a groom, it’s just fun and it makes an individual statement, like getting a tattoo done.”

Whether you agree with the process or not, one thing is for certain, dyed dogs like Emma’s get attention and Simons’ business is booming.  Do you think that it’s cruel to dye animals?  Do you agree that it’s just a fun thing to do and harmless for the pooch?  Or do you think it borders on cruelty?  Tell us where you stand on the issue in the comments below!