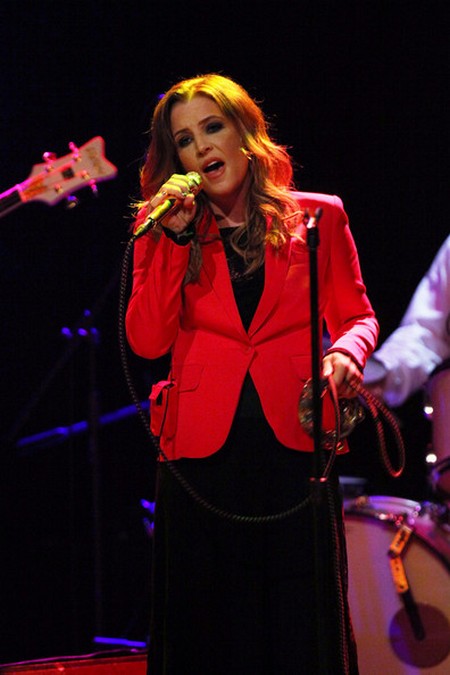 Lisa Marie Presley has always been shrouded in drama and often appears shaky in her own shoes.  Unfortunately, the singer’s first concert series in five years is off to an abominable start.  Presley took the stage on June 14th at NYC’s Gramercy Theater, with super high expectations and fell completely short.  First the venue was barely half filled with maybe 400 people and then Presley experienced some sort of throat problems.  According to a source at the National Enquirer:

“It had to be dis­appointing for her to come out and be greeted by 400 people at most,” said an eyewitness, “but the most surprising thing was she looked rail thin.  “She was dressed in a red blazer and long black maxidress,” said the eyewitness. “She had on heavy black eyeliner and looked gaunt and tired.”

Presley only performed for 45 minutes and used throat spray after each song.

“She tried to make light of it, tell­ing the audience, ‘I have a new health problem. I’ve got to spray my throat …I know it’s stupid. I’m sorry!’” said the eyewitness. “She did everything that she could to keep her throat moist, including drinking Gatorade she kept onstage. But her voice still sounded weak.  There’s fear among her pals that Lisa Marie won’t make it through the concert tour. Fortunately, she has her guitar-playing hus­band Michael Lockwood in the band, and he’s always there to support her.”

It sounds like this comeback tour is an all around bad idea for Presley’s mental and physical well-being.  Should she cancel her remaining dates or keep pushing forward knowing her performances aren’t up to par?  Tell us what you think in the comments below!