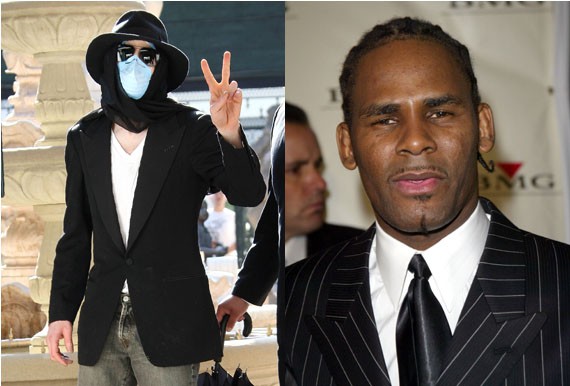 R Kelly has said that he broke down and continuously sobbed when he met Michael Jackson in the early 90’s after the idol had agreed to record Kelly’s song, ‘You are Not Alone’ for his album. The R&B singer went into detail as he spoke about meeting Michael, yet it seemed rather awkward as Jackson hid his identity from the singer, but still offered him a big hug before telling him that the song is going to be huge – which it was.

“He looked at least eight feet tall. He looked like an avatar. He was wearing a black mask over his face. Only his eyes were showing,” Kelly wrote in his memoir Soulacoaster: The Diary of Me. Finally, Mike walked over to me. He looked in my eyes, opened his arms, and gave me the hug of my life, whispering to me in his lighter-than-air, soft, high voice, ‘The world’s gonna be singing this song’.

“I blurted out something silly like, ‘Congratulations on everything you’ve done, Mike. Congratulations on being Michael Jackson’. Anyway,’ I said, ‘I’m just glad you like the song’. He said, ‘I don’t like it, Rob. I love it. I don’t want to change one thing. I want to sing it just the way you wrote it. You captured me beautifully. That’s the reason I came here. We can get started just as soon as I do my vocal warm-ups’.

“‘If you excuse me for a minute,’ I said, ‘I’ll be right back’. I walked to the bathroom and just fell out on the floor. I broke down and cried. It wasn’t that Michael Jackson was singing my song; it was that Michael had felt how I’d caught his spirit. Michael Jackson had come to Chicago to work with me!

He continued on when Michael asked him to do the background vocals for the song: “‘Rob’, he said in that high, sing-song voice, ‘Would you mind coming in here and singing backgrounds with me?’. Mind? Are you kidding? Michael Jackson was asking me to sing with him! I had to practically stop myself from running to the vocal booth. I paced myself so I could walk slowly, but in my heart I felt like a little girl.”