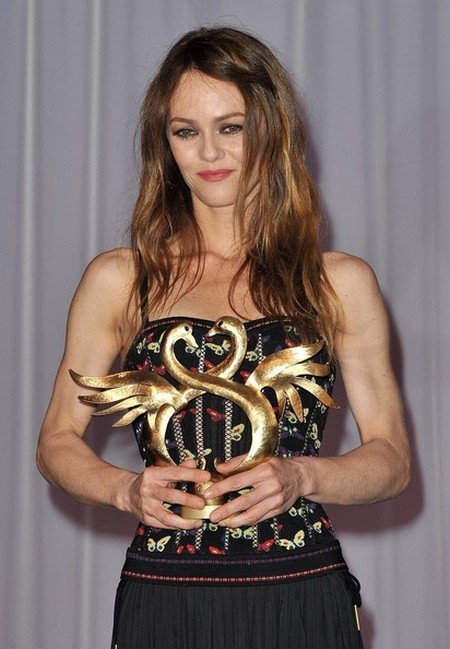 Did you really think the break up between Johnny Depp and Vanessa Paradis would be THAT amicable??  Maybe it started off that way, but it seems that Vanessa is now gunning for her stake in his treasure chest and a mere $350 million is what is at stake here.  Depp is the highest paid actor in Hollywood, bringing in $20 million per film and Vanessa was with him for fourteen of those pivotal, career building years.

“Vanessa is gunning for Johnny,” revealed an insider. “She played a big part in his success and for years they shared everything. It’s only in recent months that they’ve lived separate lives.  Vanessa hears about all these other women, and Johnny’s drinking and partying, and she can’t help wondering how long it’s been go­ing on. And career-wise, while he was becoming a major movie star she took a seven-year break from recording albums.  Just because they never got mar­ried doesn’t mean she shouldn’t have the same rights as a wife. She feels she deserves a hefty portion of that $350 million fortune.”

The two never married but Vanessa rightfully feels like she sacrificed her own blossoming career in order to be at home more to raise their children (Lily-Rose and Jack), while Johnny worked.

“Even though Johnny and Vanessa never married, factoring in the length of their relationship – 14 years – as well as having two kids together, she could walk away with millions in pali­mony and maintenance,” says an insider.

There is no question that Johnny is required to care for his children and has reportedly intended to continue supporting Vanessa’s lifestyle as well, so why is this turning ugly?  My guess is that as she’s learning about his parade of women while she continues taking care of the kids, she’s fuming and going to hit him right where he’ll feel it most- his bank account.

Should Vanessa be entitled to a nice chunk of Johnny’s millions?  Tell us what you think in the comments below!